The U.S.-Afghan Women’s Council at Georgetown names First Lady Rula Ghani of Afghanistan its newest honorary co-chair – marking the inaugural appointment of a first lady from the country.

FEBRUARY 20, 2015THE U.S.-AFGHAN WOMEN’SCouncil (USAWC) at Georgetown has named First Lady Rula Ghani of Afghanistan its newest honorary co-chair – marking the inaugural appointment of a first lady from the country.

“We are at a turning point where we can start rebuilding the country,” Ghani said during a Feb. 19 visit to the university sponsored by the Georgetown Institute for Women in Peace and Security (GIWPS). “In Afghanistan, we have had a history of very strong women, and we need to reclaim that history and talk about it.” 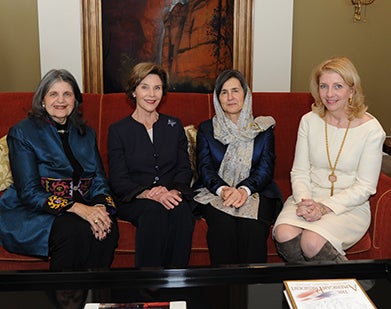 “Mrs. Ghani’s inspirational leadership [on behalf of women’s issues] reflects a deep conviction that a more inclusive society is a stronger one – a belief at the heart of the work of the GIWPS and the USAWC here at Georgetown,” DeGioia said.

The council transitioned from the U.S. State Department to Georgetown in 2008 to continue its work to support the progress of the women and people of Afghanistan. It convenes individuals and entities from the business, academic, philanthropic and government sectors to support women in the areas of education, health, economic empowerment and leadership development.

“The council is delighted to welcome the first lady of Afghanistan,” said Phyllis Magrab, Georgetown professor of pediatrics and council vice chair. “She is a dedicated champion for the important role of women in Afghan society, and she joins two distinguished advocates from the United States – Laura Bush and Hillary Clinton.”

Ghani, born and raised in Lebanon, graduated from the Instituts d’études politiques (Institute for the Study of Politics) in Paris. She went on to receive her master’s degree in political studies from American University of Beirut and a master’s in journalism from Columbia University.

The first lady has worked with her husband, President Ashraf Ghani, since his election this past September to embrace her new role while also providing a voice to the disenfranchised in Afghanistan.

She also works with a small team to foster an environment in which every Afghan citizen may achieve his or her potential and can take full part in the development of the country.

“Mrs. Ghani is a role model for the women of Afghanistan, especially young women,” Verveer said. “Her enduring commitment to empowering the most vulnerable and her unwavering optimism about the future of Afghanistan is truly inspiring.”