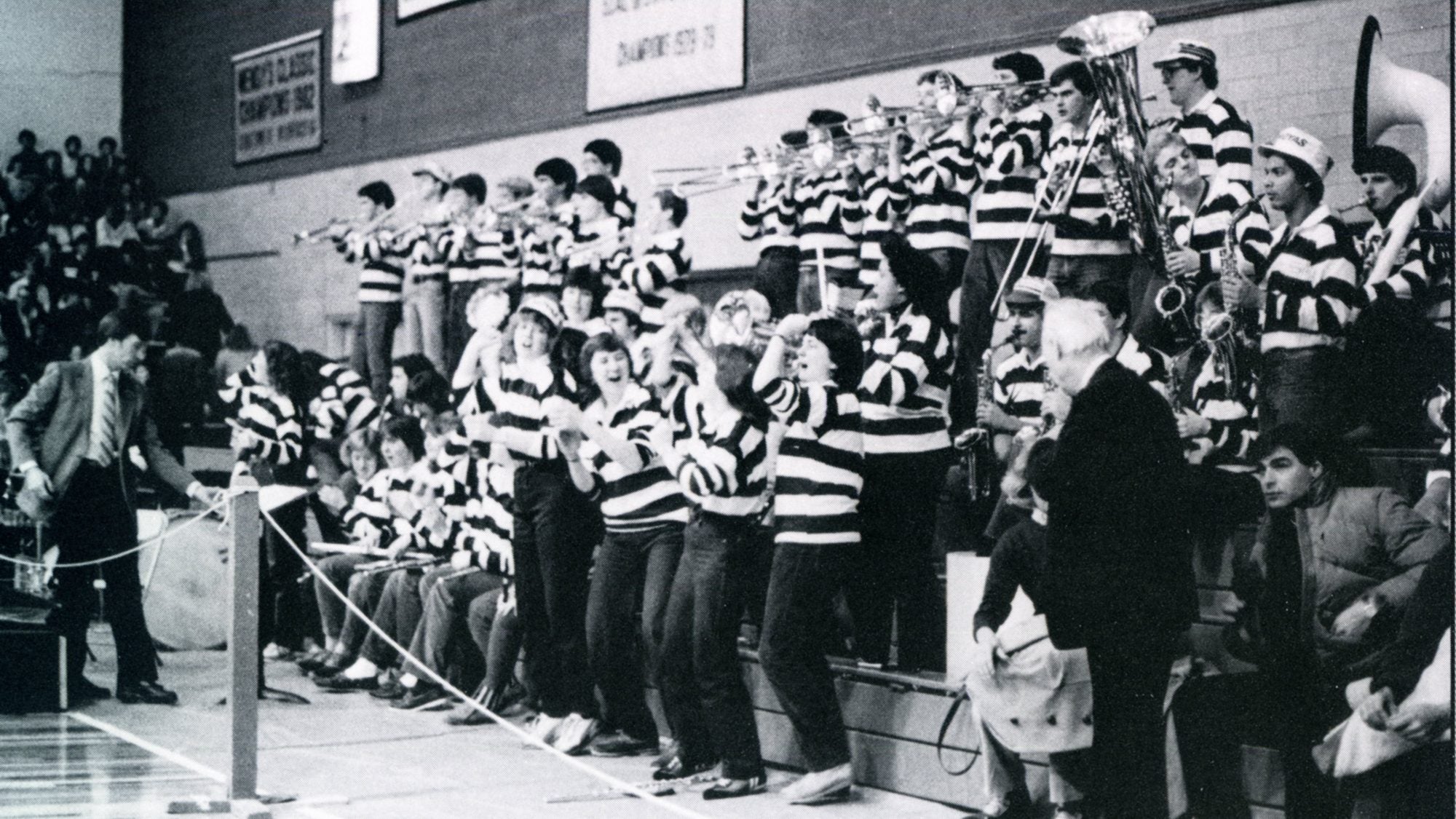 Title: 10 Things You Might Not Know About the Pep Band’s 100-Year History

On October 20, the Georgetown Pep Band celebrates the 100th anniversary of its founding.

Since 1922, the band has played for U.S. presidents, in DC parades and at hundreds of Hoya games and school functions, rousing crowds with its “Hoya Saxa!” chant and the Georgetown “Fight Song.”

And since its founding, the ensemble, which started as a 30-piece military band, has grown into a 61-member student-run band that drums up school spirit at basketball, football, soccer and, for the first time last spring, lacrosse games.

“There is nothing that builds campus spirit as well as the band can,” says Ron Lignelli, a former Pep Band director, advisor and conductor who recently retired as administrative director of Georgetown’s Department of Performing Arts after a 37-year career there. “Longevity is nice to recognize, but consistency, passion and creativity are what makes the experiences members of the band have so special.”

In April of this year, more than 100 alumni, members of the athletics and performing arts departments, and band members attended a formal ceremony in Copley Formal Lounge to celebrate the band’s centennial. And in October, Richard Fiesta (C’79, L’82, G’82), a former band president, and other alumni launched the Ronald J. Lignelli Band Endowed Fund in honor of Lignelli to provide ongoing support for the band’s instrument purchase and maintenance.

As the band continues to grow, we dove back into the band’s lesser-known — and often surprising — landmark moments from the past 100 years.

In 1922, Georgetown’s Reserve Officers Training Corps (ROTC) formed a 30-piece military band, fulfilling a “long-felt want,” according to an edition of The Hoya that year. Led by Carl Shaffer, a retired bandleader in the U.S. Army, the ensemble consisted of cadets who played instruments provided by the U.S. government in daily rehearsals. “The spirit of the members seems to be contagious,” The Hoya wrote in 1922, “and a great increase in school spirit is expected with the first appearance of the band.” Over the next few decades, the band played and marched in military formations on campus and up and down the East Coast.

2. In Its Early Years, the Band Was Known for Playing at Football, Not Basketball, Games

After a month of practice, the band made its debut performance at a 1922 game against Bucknell at the former American League Park in Northeast DC, where Georgetown’s Blue and Gray football team played. The ROTC band continued to perform at home and away games in its first decade, including in Boston, Philadelphia and New York. They also performed routines, including a “G” for Georgetown formation at a 1927 Boston College game and a moving shield formation at a 1937 University of Pennsylvania halftime show that brought a crowd of 20,000 “to their feet roaring approval,” The Hoya wrote. In 1941, they accompanied the football team to its one Orange Bowl appearance in Miami.

3. The Band Has Performed at Sea and On-Air

In 1927, en route to Boston College, they entertained passengers aboard a steamer ship with an impromptu performance. The ensemble also performed in parades, including one once they landed in Boston with 300 Georgetown students, and another down DC’s Constitution Ave. in 1948 during an event with the archbishop of Washington, DC. They magnified their reach on the radio: In the 1930s, both New York’s Columbia network and DC’s WOL a.m. radio aired its melodies on their stations. And the band even reportedly played for the world premiere of “2001: A Space Odyssey” in 1968 in DC, which was attended by director Stanley Kubrick.

4. Sailor Hats and Capes: The Band’s Uniform Over Time

In its early years, the band wore military regalia, which included blue and gray jackets and trousers and waist-high capes. Yearbook and Hoya articles reported that, in 1926, the Band traded in military wear for “snappy uniforms” of white ducks, blue sweaters and sailor hats, however temporarily. By the 1960s, according to yearbook photos, the ensemble adopted more formal attire before switching to its current blue-and-gray striped shirt in the late 1970s.

As a former student-athlete and current coach, I am extremely grateful to the Pep Band for their incredible dedication and support. They add to the incredible home atmosphere and energy for our games. I would like to congratulate the Pep Band on their centennial celebration and wish them another 100 years.

In 1943, as its members left to fight in World War II, the band faced a player shortage and was forced to dissolve, leading The Hoya to call it “the world’s most versatile college band.” Georgetown reinstated the band in 1946 after the war ended, but the group soon split in two: One ensemble was directed by the ROTC and the other by the university. The latter marked the creation of the official Georgetown University Band, signaling a shift in the ensemble’s direction from a military band to a university-wide pep band that the Georgetown community enjoys to this day.

6. The Pep Band Has Played for U.S. Presidents

They also played for President Calvin Coolidge during a march from the Hilltop to the White House on the eve of a football game in 1927. According to The Hoya, the group shouted “Hoya!” to the president, who was standing on his White House balcony. And in 2010, they played “Hail to the Chief” for President Barack Obama at what is now the Capital One Arena during a men’s basketball game against Duke in 2010. (The Hoyas won.)

7. The Band Was Invited To Play in Vietnam During the War

In 1966, the U.S. State Department invited the Pep Band to play for troops in South Vietnam during the Vietnam War after rounds of auditions. Alongside students from Howard and American University, the band formed a troupe, complete with singing and dancing routines, to entertain military members stationed there. The group was invited to visit Saigon, Danang, Nha Trang, Dalat and Bien Hoa on a Pentagon-provided plane. Unfortunately, no record was found in the Georgetown Archives of whether the band did indeed perform in Vietnam.

Former President Bill Clinton (SFS’68) performed in the pep band during his time on the Hilltop. When he ran for student council president his junior year in 1967, he campaigned as a member of Georgetown University Band on his ticket. While he did not win the election, he helped coordinate the band’s homecoming performances at Georgetown that year as chair of the university’s Student Activities Commission (SAC).

The pep band has played for thousands of cheering fans at four of the men’s basketball team’s Final Fours: in 1982, 1984, 1985 and 2007. According to the 1988 Georgetown yearbook, the band was honored as “best in the Big East” for its spirited renditions during its ‘88 season. Former band member Don Polese (C’83) recalls bussing down to New Orleans’ Superdome for the 1982 game against North Carolina, where Michael Jordan hit the game-winning shot for UNC with 15 seconds left. The band performed on national TV from behind the basket, and Polese said, “The whole nation was watching, and you just felt like you were in the middle of it all.”

Over 100 years, the Pep Band has performed everything from Georgetown’s “Alma Mater” and “Fight Song” to Broadway show tunes and Irish folk music. The band stuck to school classics in its early days, and eventually added pop to its mix in the 1960s, performing selections from “Mary Poppins,” “Jesus Christ Superstar” and “Hawaii 5-0.” In the early 1980s, the band also played jazz, swing and big band music, and in 2011, incorporated songs from the funk go-go genre, which originated in DC in the late 60s. The group’s current repertoire centers around pop ballads, including favorites like The Weeknd’s “Blinding Lights,” Beyonce’s “Crazy in Love” and ABBA’s “Mamma Mia.” The band also debuted songs like Britney Spears’ “Toxic” and Lil Nas X’s “Industry Baby” at this year’s Homecoming football game.

“This may sound cliché, but my favorite song to cheer has to be the “Fight Song” because the band always sings it once we get to the Key Bridge on the bus ride home after basketball victories. Some of my favorite memories in college have been with the band.”

Richard Fiesta (C‘79, L‘82, G‘82), former president of the band who started an endowment fund for the band’s instruments and ongoing maintenance

“When we graduated, we knew we left the band in great hands with the next generation. I think that is a really cool part of being a part of tradition that gets passed down, as I know many generations before and since us have felt the same. I found my place at Georgetown there.”