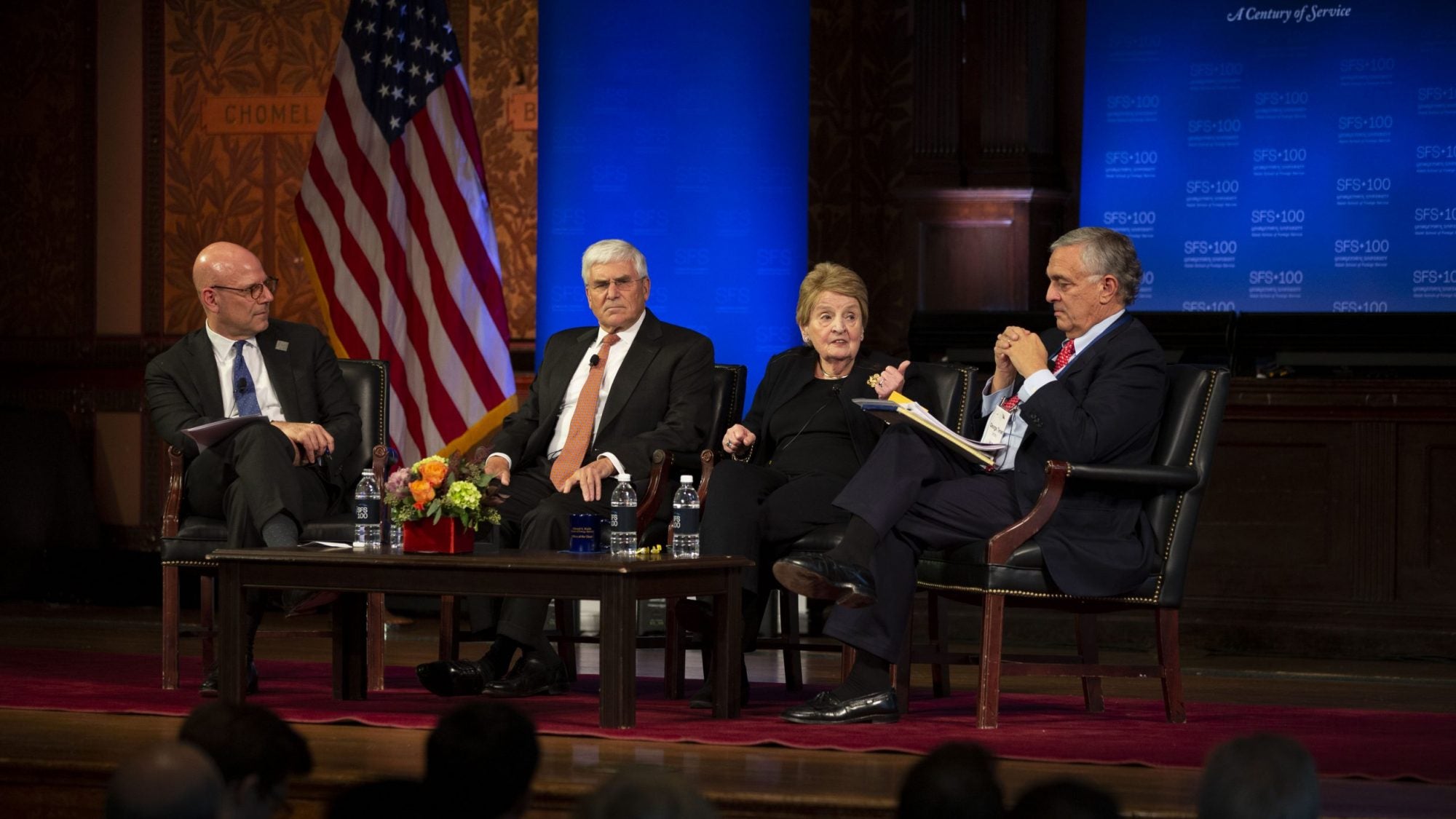 In November 2019, the School of Foreign Service gathered three of the school’s most distinguished experts on international relations for a conversation about diplomacy in the 21st century. One year after the Centennial celebration, SFS has invited them back to discuss America’s role in the world in the aftermath of the 2020 election and in the midst of a global health crisis.

The event will feature:

Registration via Zoom is required for this event. This event will have live closed captioning. All other accommodation requests related to a disability should be sent to sfsevents@georgetown.edu by November 13. A good-faith effort will be made to fulfill all requests.

Madeleine K. Albright is a professor, author, diplomat, and businesswoman. In 1997, she was named the first female Secretary of State and became, at that time, the highest ranking woman in the history of the U.S. government. From 1993 to 1997, Dr. Albright served as the U.S. Permanent Representative to the United Nations and was a member of the President’s Cabinet. She is a Professor in the Practice of Diplomacy at the School of Foreign Service. Dr. Albright is Chair of Albright Stonebridge Group, a global strategy firm, and Chair of Albright Capital Management LLC, an investment advisory firm focused on emerging markets. She also chairs the National Democratic Institute, serves as the president of the Truman Scholarship Foundation and is a member of the U.S. Defense Department’s Defense Policy Board. In 2012, she was chosen by President Obama to receive the nation’s highest civilian honor, the Presidential Medal of Freedom, in recognition of her contributions to international peace and democracy. She is the author of seven New York Times bestselling books, including her most recent book, Hell and Other Destinations: A 21st-Century Memoir.

General George W. Casey, Jr. served 41 years in the U.S. Army following his graduation from Georgetown University. He is an accomplished leader and an authority on strategic leadership who led the Army from 2007 to 2011 and is widely credited with restoring balance to a war-weary Army and leading the transformation to keep it relevant in the 21st century. He was a stalwart advocate for military families, wounded soldiers, and survivors of the fallen, and took on the tough issues of suicide and reducing the stigma attached to combat stress. Prior to this, Gen. Casey commanded the Multi-National Force – Iraq, a coalition of more than 30 countries, where he guided the Iraq mission through its toughest days. In his 15 years as a general officer, he held numerous senior leadership positions in Europe, the Middle East and in the United States. He currently lectures on leadership at the SC Johnson College of Business at Cornell University, at the Darden School of Business at University of Virginia, and to the leaders of national and multinational corporations. He also lectures on International Relations at the Korbel School at the University of Denver, where he is the Rice Family Professor of Practice.

George J. Tenet served under Presidents Bill Clinton and George W. Bush as the 18th Director of Central Intelligence from 1997 to 2004, and as Deputy Director from 1995 to 1997. In these roles, he oversaw the CIA through many critical challenges, including the emergence of Al-Qaeda as a threat, the September 11 attacks, and the start of the war in Iraq. Earlier in his career, he served on the National Security Council and as Staff Director of the Senate Select Committee on Intelligence. In December 2004, President George W. Bush awarded him the Presidential Medal of Freedom, the United States’ highest civilian honor. He was awarded the two highest decorations for leadership from the Central Intelligence Agency and the United States Intelligence Communities. The Anti-Defamation League awarded Mr. Tenet America’s Democratic Legacy Award. He is the first American to receive the Egyptian Order of Merit (First Class) and the first non-Canadian to be awarded the Canadian Security Intelligence Service Gold Medal. He also received the Jordanian Independence Medal of Honor. Mr. Tenet received his undergraduate degree from the Edmund A. Walsh School of Foreign Service and a MIA from the School of International and Public Affairs at Columbia University. He is currently Chairman of Allen & Company LLC, a privately held investment bank based in New York.

As both a scholar and practitioner, Dr. Joel Hellman brings to Georgetown a unique and valuable perspective from his work on issues of governance, conflict and the political economy of development around the world. He served as director of the World Bank’s Fragile and Conflict Affected States department, based in Nairobi, Kenya, before his current position. He also played a critical role in the World Bank’s response to the devastating tsunami in Aceh, Indonesia. In addition to serving at the European Bank for Reconstruction and Development in London, he has taught as a faculty member in the political science departments of both Columbia University and Harvard University. He holds a Ph.D. in political science from Columbia and an M.Phil. in Russian and East European studies from the University of Oxford. He received his B.A. from Williams College.