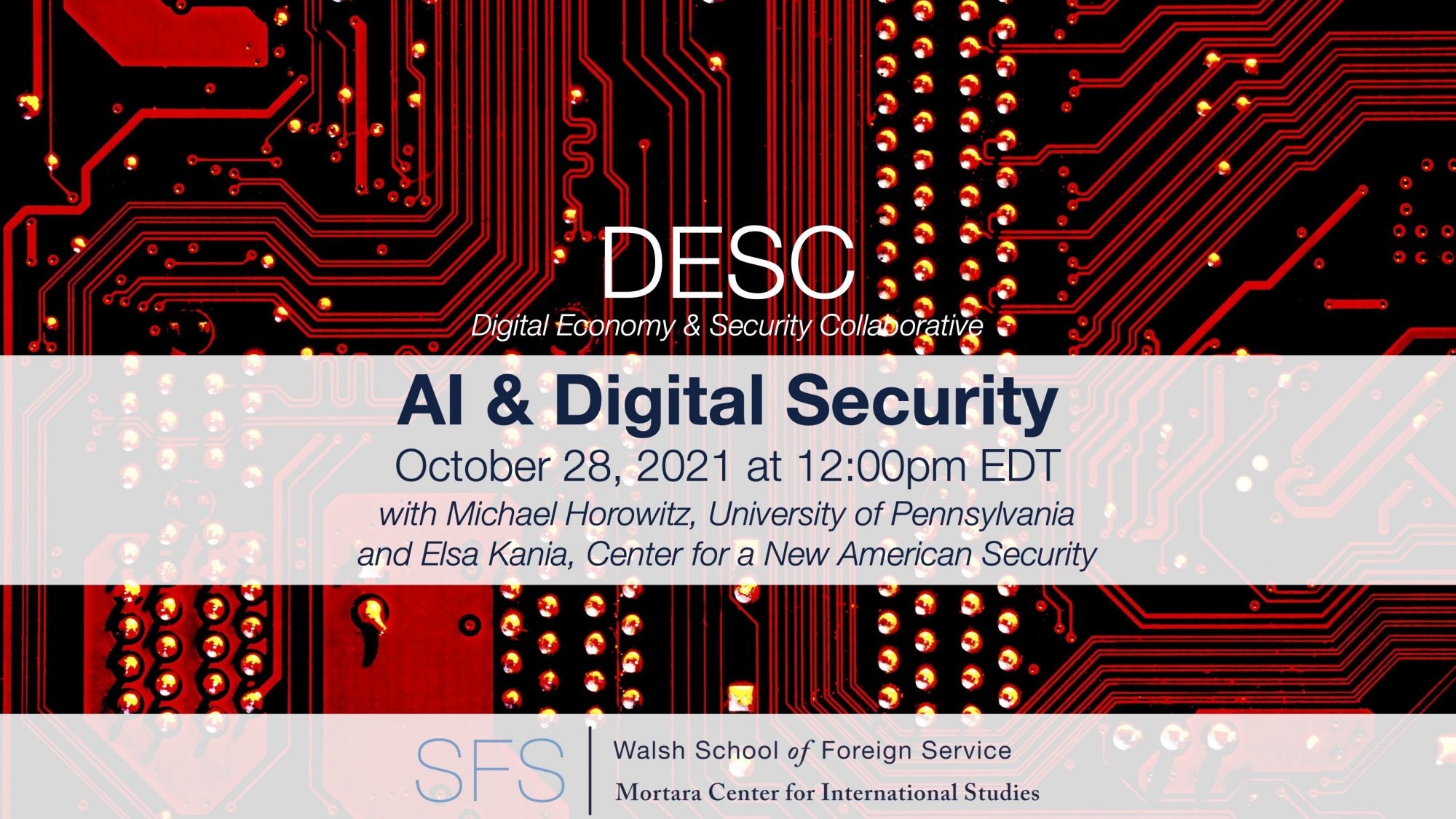 The Digital Economy & Security Collaborative (DESC) is launching a two-year speaker series this fall, bringing in leading thinkers from a range of disciplines to share their ideas and engage with the DESC community. The series covers social media, cybersecurity, artificial intelligence, technology standards, supply chains, and transnational repression.

Please join us on Thursday, October 28 at 12pm EDT for the third event of the series, where Michael Horowitz of the University of Pennsylvania and Elsa Kania of the Center for a New American Security will discuss AI and digital security. The event will be moderated by Professor Abraham Newman.

Register here to receive the Zoom link for the event.

Michael C. Horowitz is Director of Perry World House and Richard Perry Professor at the University of Pennsylvania. He is the author of The Diffusion of Military Power: Causes and Consequences for International Politics, and the co-author of Why Leaders Fight. He won the Karl Deutsch Award given by the International Studies Association for early career contributions to the fields of international relations and peace research. He has published in a wide array of peer reviewed journals and popular outlets. His research interests include the intersection of emerging technologies such as artificial intelligence and robotics with global politics, military innovation, the role of leaders in international politics, and geopolitical forecasting methodology. Professor Horowitz previously worked for the Office of the Undersecretary of Defense for Policy in the Department of Defense. He is a senior fellow for defense technology and innovation at the Council on Foreign Relations, where he is also a life member. Professor Horowitz received his Ph.D. in Government from Harvard University and his B.A. in political science from Emory University.

Elsa B. Kania is an Adjunct Senior Fellow with the Technology and National Security Program at the Center for a New American Security. Her research focuses on Chinese military strategy, military innovation, and emerging technologies. Her book, Fighting to Innovate, should be forthcoming with the Naval Institute Press in 2022. At CNAS, Ms. Kania has contributed to the Artificial Intelligence and Global Security Initiative and the “Securing Our 5G Future” program, while acting as a member of the Digital Freedom Forum and the research team for the Task Force on Artificial Intelligence and National Security. Ms. Kania also works in support of the U.S. Air Force’s China Aerospace Studies Institute through its Associates Program, is a Non-Resident Fellow in Indo-Pacific Defense with the Institute for the Study of War, and is a Non-Resident Fellow with the Australian Strategic Policy Institute’s International Cyber Policy Centre. She serves as an Adjunct Policy Advisor for the non-profit Institute for Security and Technology; contributes to the Party Watch Initiative at the Center for Advanced China Research; and co-founded the China Cyber and Intelligence Studies Institute, a non-profit research collaboration.

Her writings and commentary have appeared in Foreign Affairs, Foreign Policy, Lawfare, Politico, Defense One, The Strategist, and The Bridge, among others. She has been quoted in outlets including The New York Times, The Washington Post, The Wall Street Journal, The Financial Times, and The Economist. Her academic research has been published in The Journal of Strategic Studies, The Cyber Defense Review, and PRISM, The Journal of Complex Operations. Currently, Ms. Kania is a PhD candidate in Harvard University’s Department of Government. Her dissertation will examine military learning and innovation in comparative perspective. She is also a graduate of Harvard College (summa cum laude, Phi Beta Kappa), where her senior thesis was awarded the James Gordon Bennett Prize, and has received a Master of Arts in Government from Harvard University. Ms. Kania was a Boren Scholar in Beijing, China, and she maintains professional proficiency in Mandarin Chinese. Her views are her own.