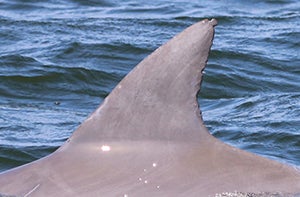 Title: University Making First-Ever Study of Dolphins in the Potomac

Georgetown’s Janet Mann, who has studied bottlenose dolphins in Shark Bay, Australia, for more than 30 years, begins with her research team the first-ever study of dolphins in the Potomac and the Chesapeake Bay.

Georgetown’s Janet Mann, who has studied bottlenose dolphins in Shark Bay, Australia, for more than 30 years, is now literally examining them in her own back yard.

Mann, vice provost for research and a professor in the biology and psychology departments, and Eric Patterson, an assistant research professor of biology, are co-directing the Potomac-Chesapeake Dolphin Project, designed to better understand and protect the bottlenose dolphins of the Potomac and the Chesapeake Bay.

This is the first time anyone has attempted a study of these dolphins, which many people know nothing about.

To date, the project has discovered 200 dolphins in the two waterways, and the researchers expect to find many more, perhaps up to 1,000. 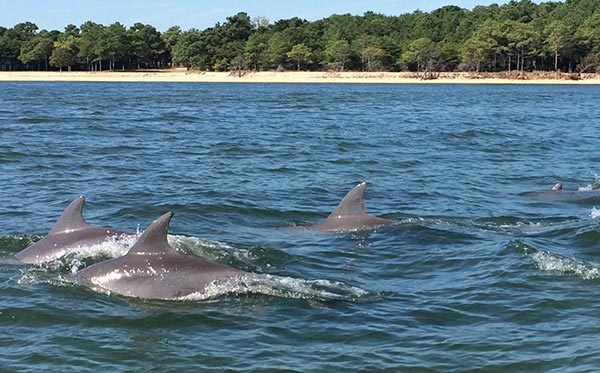 The Potomac-Chesapeake Dolphin Project has discovered 200 dolphins in the two waterways. – Photo taken under NMFS Permit No. 19403

The project wasn’t exactly planned – it began after Mann and her husband purchased a home off the shores of the Northern Neck of Virginia as a retreat to “get away from work.”

“Literally the day we closed on the house, there were dolphins in the back yard,” Mann explains, and laughs. “My husband is a patient man. We’ve turned our what was supposed to be a little retreat for us into a field station.”

Mann and her team, which includes both undergraduate and graduate students, regularly get in the project boat, playfully named Ahoya, and head out to the water to study the dolphins’ abundance, distribution, population structure and disease risk.

Project leaders say the Potomac dolphins are larger in size and are a more stressed population, perhaps because of pollution and relative scarcity of food when compared to the pristine environment of Shark Bay.

Of major concern to the researchers are the recent huge die-offs of dolphins and whales along the Atlantic Coast from morbillivirus, which causes measles in humans and skin lesions, pneumonia, brain and other infections in marine mammals.

“We don’t know what’s causing these outbreaks and why they are becoming more frequent,” Mann says. “We don’t know whether they have to do with other factors in the environment that are hurting their immune system or making them more vulnerable to these outbreaks. These are really important questions we hope to help answer.”

She says scientists believe dolphins transmit morbillivirus through respiratory droplets or “blow” when they breathe synchronously together at the surface.

With more than 30 years of data on this behavior from Shark Bay, the team is now looking at the similar patterns of behavior in the Potomac population.

The team includes Shweta Bansal, an assistant professor of biology at Georgetown who serves as the project’s disease ecologist and modeler. Patterson says he’s interested in the population structure of the Atlantic dolphins as well.

“We know they are probably part of a migratory population but they could be from one of several NOAA (National Oceanic and Atmospheric Administration) recognized populations,” he says. “By taking photographs of individuals dolphins and matching them to photographs taken by other researchers studying dolphins up and down the East Coast, we will get a better idea of their overall range and when they are seen where.”

“This will help us better understand how to conserve and protect this understudied group of dolphins,” he adds.

Each of the 200 dolphins is named after significant historical figures throughout U.S. history. Obama the Dolphin is shown here swimming through the waterway. – Photo taken under NMFS Permit No. 19403

The serious project also has some lighthearted aspects.

Each of the 200 dolphins, for example, is named after significant historical figures throughout U.S. history, including obscure ones such as “Alben” for Harry Truman’s vice president, Alben Barkley, as well as more well-known politicians such as Nixon and Obama. 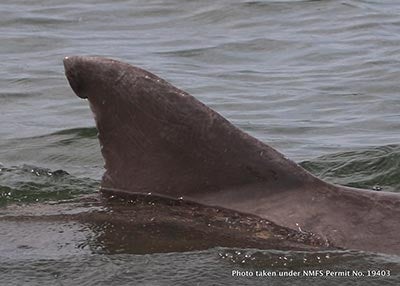 Nixon the Dolphin is shown here swimming through the waterway. – Photo taken under NMFS Permit No. 19403

Mann says the naming is appropriate, as dolphins in the area date back to the 1800s, with one sighting as far up the Potomac as Washington, D.C.

“People love the dolphin names because we took a bipartisan approach,” Mann jokes. “So that you can find a dolphin named for your favorite political figure no matter what your political persuasion.”

The project is onFacebook, Instagramand Twitter. It’s hashtag – is #pcdolphins.

Desirae Cambrelen (C’15) spent a summer as a field assistant working on the Australia project with Mann and more recently worked on the Potomac-Chesapeake Dolphin Project.

“Our project in Shark Bay has been going on for more than 30 years, and as a result, is well-established, but I always wondered how it got to that point,” she says. “As a Potomac field assistant, I got a brief glimpse into that journey and was able be a part of the intensive planning, decision-making and organization that went into making the PC Dolphin Project a reality.”

Cambrelen is now a nutrition researcher at the National Zoo, where she analyzes the nutritional content of plants to support a project examining the behavioral ecology of primates in Gombe National Park in Tanzania.

The biology major says she helped create data collection sheets for the project, among many other tasks, and observed, “how differently our new dolphins behaved.” 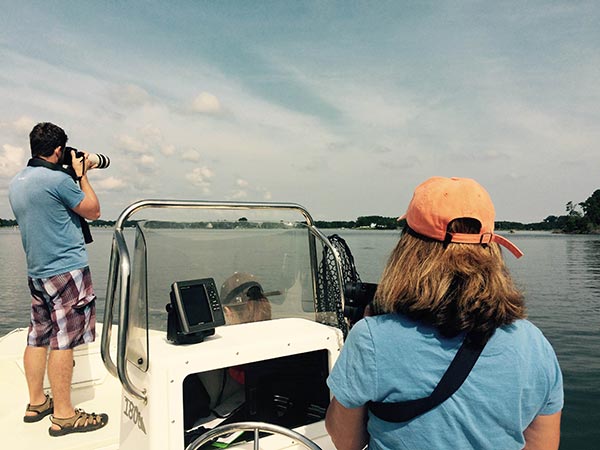 “I was truly amazed at how all of the moving parts came together for us to ultimately collect data,” says Cambrelen, who plans to apply to a graduate school in the field of conservation this fall. “I loved being a part of this process from the beginning and am incredibly grateful for that experience.”

Mann says one of the other benefits of having students participate in the project is that they learn how to work together in a team.

“Because you’re working on a boat, it’s important that everybody is paying attention, that everybody does his or her job,” she says. “They’re all together and we’re all seeing things together and that’s something that’s particular to fieldwork. It’s fun.”