Understanding the nation through the lens of the African American experience gives people the chance to “realize that we are more alike than we are different,” said Lonnie Bunch, founding director of the National Museum of African American History and Culture, at Georgetown yesterday.

Bunch was on campus to receive an honorary doctor of humane letters from Georgetown for his role in the creation of the historic museum, which has welcomed nearly 1 million visitors since it opened this past fall.

“For us, this museum had to be a place where people actually found the truth,” the curator and author explained. “But equally important, we had to have people understand that this museum was not a museum for black people by black people.” 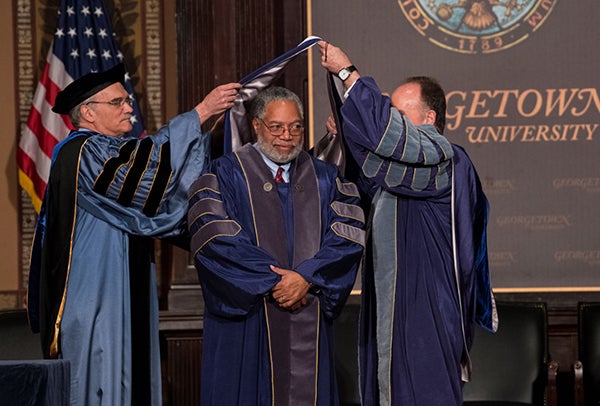 Bunch also said the goal of the museum was to have Americans remember and confront “America’s tortured racial past – so we can illuminate all the dark corners of this nation’s history, because if we don’t, there is nothing as awful as a people who are forgotten…”

The founding director said he was particularly moved by a seven-hour conversation with Mamie Till-Mobley, the mother of Emmett Till, who in 1955 was murdered for whistling at a young white woman.

“… She said to me [that] for 50 years she carried the burden of remembering – of remembering Emmett Till,” the museum founding director said. “She said it’s now the turn for you and museums to help us remember.”

A prolific author, Bunch served in leadership roles at museums across the country, including the California African American Museum, the Smithsonian Institution and the Chicago Historical Society, where he led a successful capital campaign and institutional reorganization and helped lay the foundation for its transformation into the Chicago History Museum.

He is also the recipient of The Historical Society of Washington, D.C.’s Visionary Historian Award.

“For more than a decade, he worked tirelessly to transform this museum from a long-held aspiration into a powerful space for remembrance and engagement in the heart of our National Mall,” he read. “In opening this landmark museum, Mr. Bunch has forged a new opportunity for all of us to honor and celebrate the many dimensions of the African American story, creating a place that encourages reflection, dialogue and understanding.”

“[Bunch] brought this vision of history – of remembrance – to life in the National Museum of African American History and Culture,” DeGioia said, “where he first collected, then transformed an extraordinary group of artifacts into an urgent, powerful and profound illumination of the American story.” 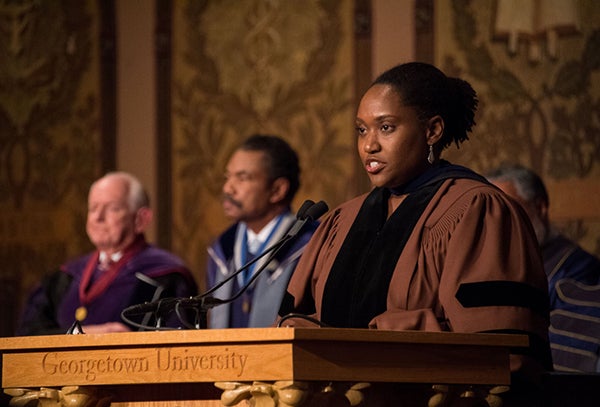 Another Georgetown history professor, Marcia Chatelain, gave the invocation at the ceremony, which was held in historic Gaston Hall.

“Creator, we gather today to celebrate the gift of memory,” she said. “You have endowed us with theability to recall the past, to savor times gone by, and to commemorate the struggles of our ancestors, the creation of our nations, and absorb the wisdom of the generations.”

“We pray that we continue to honor the legacy of the slave, the sharecropper, the marcher, the marginalized, the incarcerated, and the ignored,” Chatelain said.

The ceremony also included a composition called “We Choose to Remember” by Nolan Williams, Jr., first presented at the 2017 Let Freedom Ring! Celebration at the John F. Kennedy Center for the Performing Arts in observance of Martin Luther King Jr. Day. 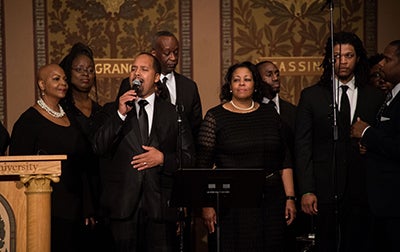 The piece pays tribute to the memory of the 272 individuals sold in 1838 for the benefit of the university.

At yesterday’s ceremony, Bunch noted the “11-year period of gestation” for the museum, which began with a staff of two, no idea where the museum would be, no collections and no money raised.

“But what we had was a belief that emanated from the African American community,” he said, “a belief that you could make a way out of no way. A belief that said we will fulfill the dreams, the hopes of so many generations, who fought for, who campaigned, who believed that there needed to be a museum that would help us all to remember.”

Bunch was first appointed to the Committee for the Preservation of the White House in 2002, after which President Barack Obama reappointed the historian to the committee in 2010.

In 2005, Bunch was given the mandate of conceptualizing, building and leading the Smithsonian’s National Museum of African American History and Culture.

A native of Newark, New Jersey, Bunch attended Howard University before transferring to American University, where he received his bachelor’s and master’s degrees in American and African American history in the 1970s.

He later taught at American, as well as at George Washington University and the University of Massachusetts at Dartmouth.

The honorary degree to Bunch is part of the Let Freedom Ring! Initiative led by co-chairs Patricia Grant, interim associate dean for undergraduate programs in the McDonough School of Business and Andria Wisler, executive director of the Center for Social Justice Research, Teaching and Service.

The initiative provides the opportunity to engage in conversations on campus about the capacity to bring about social change. Guided by Dr. King’s April 4, 1967, speech, “Beyond Vietnam: A Time to Break the Silence,” Georgetown community members have been asked to reflect on urgent problems that demand social action, with the hashtag #GUMustSpeak.