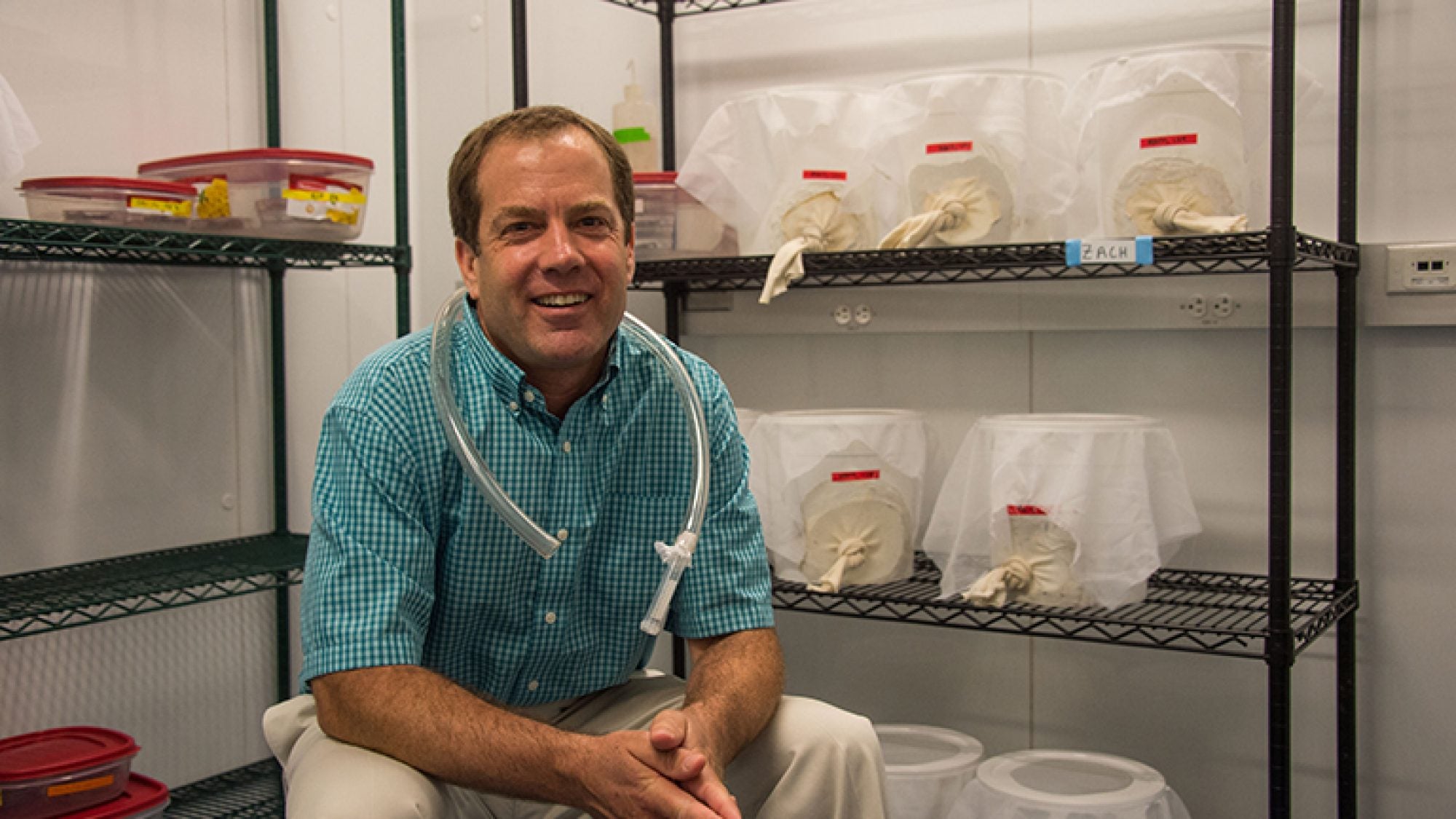 Biology professor Peter Armbruster is studying the Asian tiger mosquito (Aedes albopictus) to, among other research avenues, discover how it manages a process called diapause.

In diapause, the adult female Asian tiger mosquito (and some other insects) measures day length and uses that information to cause its offspring to go into a state of dormancy and survive over the winter.

“What’s so cool about it is they’re using the day length before winter arrives, in September, to in a physiological sense, anticipate the environment their offspring will experience and modify the development of the offspring so they can cope with their future conditions,” Armbruster notes.

He says the diapause eggs are larger and have a thicker wax layer on them, which helps them to retain water more effectively. 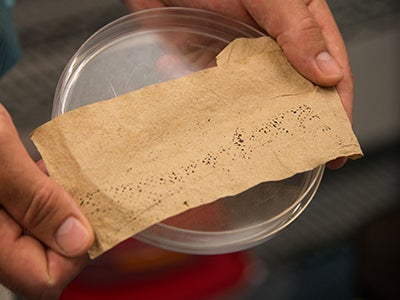 “The mom packs a bigger lunchbox, so to speak, to help her offspring survive through the winter,” the biologist explains.

The worst offender involving the Zika virus is the Aedes aegypti mosquito, which cannot go into diapause, but the Asian tiger mosquito is also capable of infecting people with the virus, most likely in Brazil.

Armbruster’s National Institutes of Health-funded research is relevant to the Zika virus epidemic because diapause involves the manipulation of a broad range of basic physiological processes, such as lipid metabolism, energy storage and other aspects of energy metabolism.

“Even if we didn’t interfere with diapause per se, we’re identifying the molecular pathways controlling a lot of basic physiological processes that could provide targets for vector control,” he says.

In other words, understanding the molecular mechanism that allows the Asian tiger female to produce diapause eggs could result in the development of an intervention to prevent the females from using the technique

“That would presumably knock the populations down quite substantially over the winter,” the professor says.

The professor has traveled to Japan in the past as well as numerous places in the United States to literally chase after Asian tiger mosquitoes.

At Georgetown, he takes care of tens of thousands of mosquitoes in white breeding buckets, sometimes putting them literally on ice so he can monitor their diapause behavior. He wasn’t always interested in mosquitoes.

“In grad school I thought about studying elephants, but I decided on mosquitoes instead because of the ability recreate their habitat in a lab,” he says, “and my interest in the disease transmission aspect.” 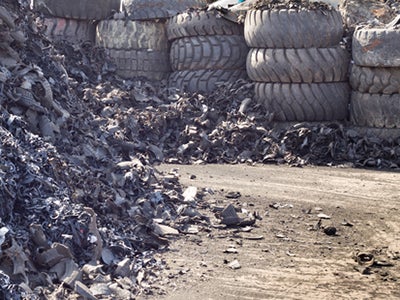 He jokes about the non-glamorous nature of his work, haunting junk yards and used auto salvage lots compared to researchers such as Janet Mann, who studies dolphins in pristine Shark Bay, Australia.

Armbruster and his research team scour junkyards, auto salvage yards and tire piles for breeding mosquitoes and bring them back to the lab.

“I’ll never forget the first time I took my younger son collecting, and we went to this junkyard and I got a tire and siphoned some water out of the tire, and I said, ‘Look Alex, look at all these mosquitoes isn’t that great?’ ”

“I could just see the horror in the eyes of an 8-year-old boy who just realized that what his father does for a living is to suck water out of old used tires.”

Alex Armbruster is now a rising junior in the College. 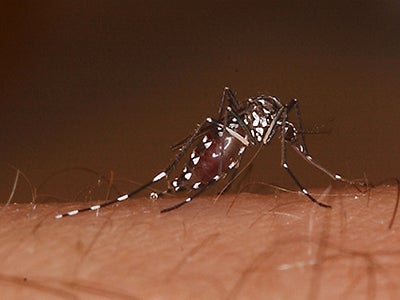 “The most likely scenario is that a shipment of infested used tires from Japan was transported into Houston, and they spread from there,” the biology professor notes.

He says that within a year the mosquitoes had traveled over 500 kilometers and now are observed as far north on the East Coast about half a mile from the Newark Airport.

“That was not the result of adult mosquitoes flying,” he explains, “that was because these containers where they live as larvae tend to get moved around, and we still don’t know if there may have been multiple invasions in the U.S. – that’s also something we’re working on.”

Armbruster said the Asian tigers were appealing as a research topic because they represent a natural experiment to study how they adapt as they spread across North America.

The majority of the 174 native North American species of mosquitoes do not carry diseases.

Most of them are just annoying. But he thinks Americans should err on the side of caution, especially since climate change will increase both numbers and range of the Adedes albopictus.

“The higher temperatures will likely increase their ability to transmit disease,” he notes.

He believes that companies that claim to rid your yard of mosquitoes are a bad idea. Mosquito control, often organized at the county level, is somewhat haphazard, he says, with some counties being very effective and others very ineffective.

And the companies, which never coordinate with county mosquito control functions, can actually make the problem worse.

“If the county comes in, they’re trying to do a systematic control effort over a whole neighborhood,” Armbruster says. “If you hire one of these companies to come to your house, they’re going to treat your yard and that’s it. So if there are mosquitoes next door, that’s not going to help matters, and as soon as the insecticides wear off the mosquitoes are going to be right back.”

The more effective way to battle the bugs is to have local mosquito control officials identify the larval habitats and get rid of them.

On the personal level, people should make sure there aren’t any containers on their property that will fill up with water and become a mosquito-breeding haven, the professor says.

Getting rid of mosquitoes capable of transmitting serious diseases is a difficult problem. 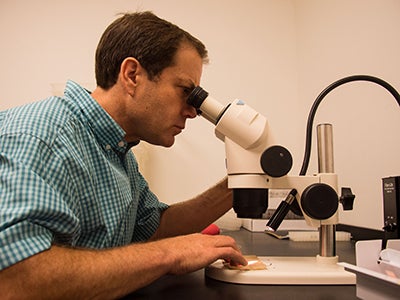 “Unless there’s some genetically engineered kind of mechanism that actually actively spreads the change that affects disease transmission then you’re not going to get it to spread through a natural population,” the biologist explains.

“On the one hand, these are pretty exciting times,” he adds. “There are all these new genetic technologies that have been developed that make these kinds of interventions a possibility, but we don’t know enough about the natural ecology of the mosquitoes to know exactly what’s going to happen when we introduce these things into the wild.”