Title: More Than 50 Honored for Service and Academic Enterprise Support at Faculty Convocation

Georgetown recognizes more than 50 faculty members and academic professionals for their 20 years of service to the university as well as 10 distinguished donors who support the university’s academic enterprise during Spring Faculty Convocation.

– Georgetown recognized 57 faculty members and academic professionals for their 20 years of service to the university as well as 10 distinguished donors who support the university’s academic enterprise during this year’s Spring Faculty Convocation.

Barbara Bayer, professor and chair of the neuroscience department, delivered the annual Life of Learning address during the April 5 event in Gaston Hall.

Bayer reflected on the early foundational years of her career and shared her thoughts on the common denominator among high-achieving educators. 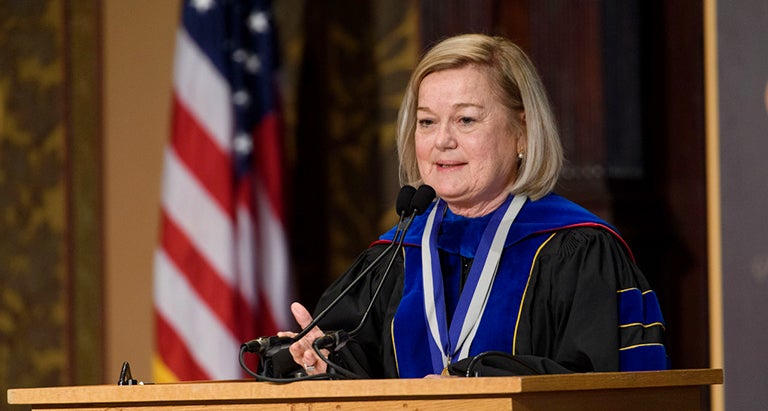 “I realized something really important my life of learning story is mostly about the people who helped me and influenced my decisions and accomplishments along the way,” said Bayer, also senior associate dean of the biomedical graduate education. “… I [also] realized that the most sustainable path to excellence, accomplishment and commendation is paved by adhering to one certain principle. Show up, and do your job.”

Bayer, whose research interests include control of immune function by the central nervous system, has been involved in graduate education at Georgetown for more than 30 years, and has mentored graduate students in both the Interdisciplinary Program in Neuroscience and the pharmacology department.

She also has been responsible for securing graduate training opportunities in the biomedical sciences and consulted and advised many faculty on campus engaged in research involving various treatments of or stress on the immune system.

During convocation, faculty members and academic professionals are honored with Vicennial Medals for their 20 years of service – gold for full-time employees and silver for part-time.

“We extend a special welcome to this year’s medal recipients, to their families and friends who have gathered in their honor, and to the department chairs who have joined the procession today to help us mark this achievement,” Georgetown Provost Robert Groves said during the ceremony.

This year’s Gold Vicennial Medalists include:

/* >The university also inducted its most distinguished philanthropists into the 1789 Society during the convocation ceremony. The new members were recognized for their charitable gifts to support academic endeavors. These gifts allow the university to attract the most talented students and scholars and to support them with the resources they need to succeed.

“Georgetown is deeply grateful to you and the other 1789 Society members for such remarkable generosity,” Groves said. “Thanks to these gifts, we are able to create faculty chairs, assure financial aid to deserving students and provide outstanding campus facilities.”