Georgetown’s Kalmanovitz Initiative for Labor and the Working Poor plans to identify, nurture, train and convene a new generation of diverse, female labor leaders in a collaborative effort with Rutgers University.

Georgetown’s Kalmanovitz Initiative for Labor and the Working Poor will identify, nurture, train and convene a new generation of diverse, female labor leaders in a collaborative effort with Rutgers University.

Funded by the Berger-Marks Foundation, the WILL (Women Innovating Labor Leadership) Empower project will involve both the Georgetown initiative and the Center for Innovation in Worker Organization at the Rutgers School of Management and Labor Relations

“The Kalmanovitz Initiative is delighted to add this exciting new dimension to its work promoting a more just, sustainable and democratic economy,” says Joseph McCartin, the initiative’s director. “By mobilizing women of all backgrounds to steer a dynamic workers movement, WILL Empower deepens Georgetown’s commitment to advance justice and the common good.”

The project begins this month, with programming in place by the fall of 2017.

Georgetown and Rutgers will recruit project practitioners who are in the early stages of their labor-related careers, as well as mid-career executives, to engage in multiple gatherings, trainings, mentoring structures and peer support initiatives.

Participants will be paired with experienced mentors and some will be placed as apprentices in labor unions and social and economic justice organizations.

AFL-CIO Secretary-Treasurer Liz Shuler anticipates that Will Empower will become “an indispensable new resource to build women’s leadership for the entire labor movement.”

Women in the WILL Empower project also will benefit from the Future of Labor Interactive Project (FLIP), a multimedia, interactive platform that will offer potential female leaders a host of resources for deepening their fight for economic justice.

FLIP will feature public policy forums, research hubs, community-based projects, and new reports and data. With FLIP, women will stay at the center of their own stories about work, pay, workplace rights and our changing economy.

“Women are half the workforce and nearly half of all union members – they hold the power to trail blaze a stronger future for the labor movement,” says Shuler, who serves in the second-highest position at the federation of unions.

Led by Women, For Women

Lane Windham, a Fellow at the Kalmanovitz Initiative who holds a doctorate in U.S. history and spent nearly 20 years working in the union movement, will serve as project director for WILL Empower at Georgetown.

“Women’s activism and ideas are the hidden advantages for building a broad-based movement for social and economic justice,” says Windham, whose book about union organizing in the 1970s is due out on Labor Day. “WILL Empower will activate and nurture women’s organizational skills, and will be a launching pad for a new generation of female labor leaders.”

WILL Empower will be steered at Rutgers by Sheri Davis-Faulkner, who holds a doctorate in American studies and has experience advancing social justice in the arenas of labor, women’s rights, and the environment.

Davis-Faulkner will work in tandem with Marilyn Sneiderman, the director of Rutgers’ Center for Innovation in Worker Organization. Sneiderman brings with her three decades of experience in the union movement, including 10 years as director of the National AFL-CIO’s Department of Field Mobilization.

McCartin says the focus on building a pipeline of future female labor leaders comes at a time when the labor movement faces unprecedented economic and political challenges.

“Women will be key to the movement’s future because women hold many of the low-wage and contingent jobs that permeate today’s workplaces, and also have already been leading a new generation of workers’ organizations,” McCartin explains. “Analysts expect women to make up a majority of union membership by 2023.”

“It is essential to train and lift up a new generation of powerful and diverse women’s leadership who can chart a path forward for working people,” adds Linda Foley, president of the Berger-Marks Foundation. 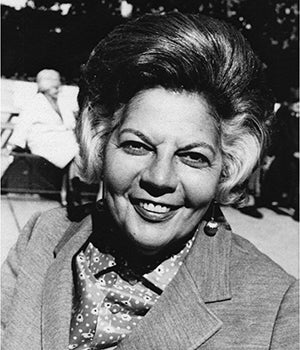 The foundation was established in 1997 to honor the memory of Edna Berger, the first female lead organizer for The Newspaper Guild-CWA, and her husband, Tin Pan Alley songwriter Gerald Marks.

Marks, who bequested his fortune to set up the foundation, co-wrote the popular early 1930s song “All of Me.”