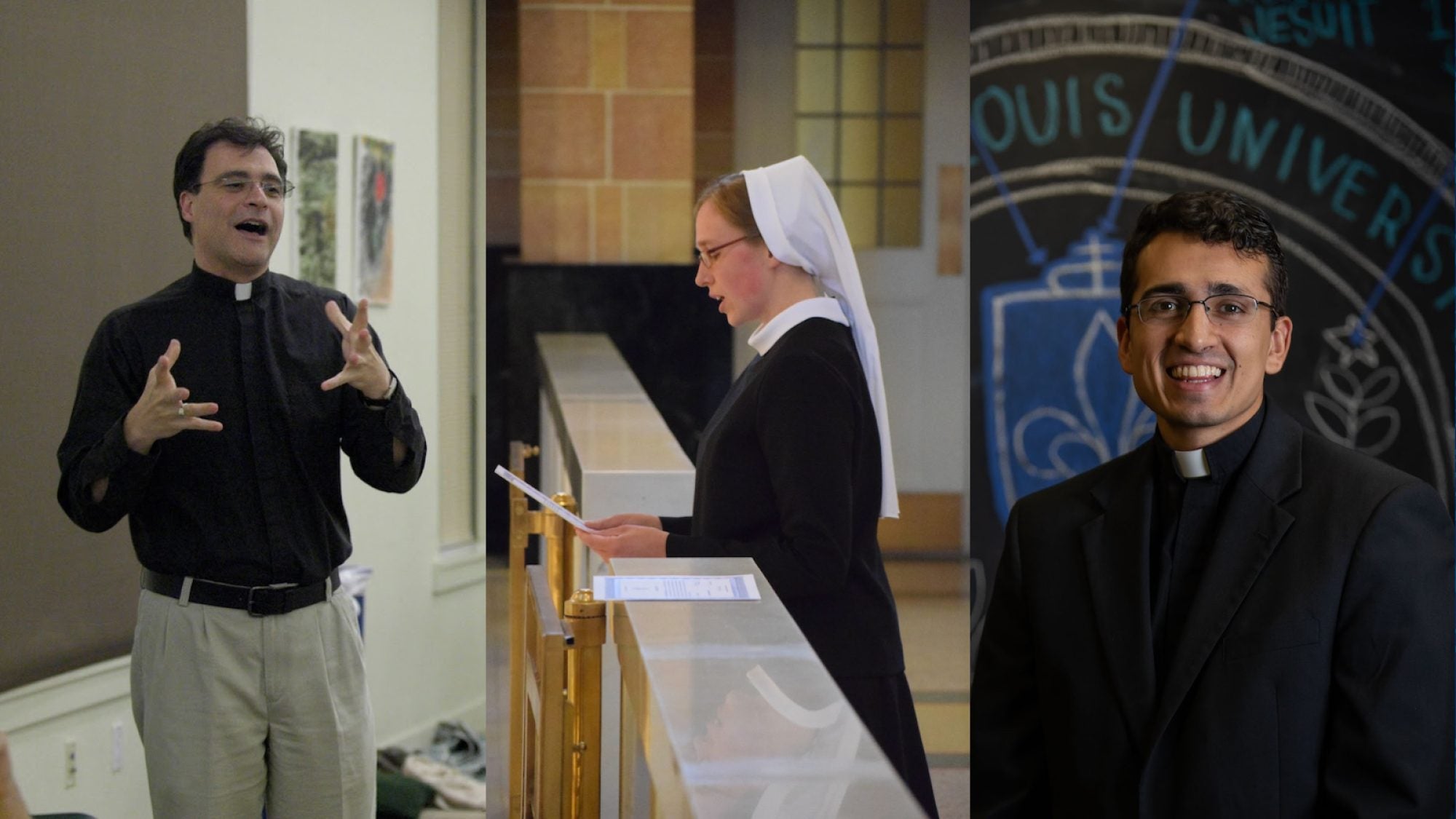 Title: 3 Alumni Who Found Their Religious Vocations on the Hilltop

On July 31, Georgetown celebrates the end of the Ignatian Year, the 500th anniversary of the day St. Ignatius, the founder of the Jesuits, was injured by a cannonball in Pamplona, Spain, that spun his life toward a religious vocation.

During the Ignatian Year, which began on May 20, 2021, Georgetown hosted events, shared stories about its Jesuit formation, offered retreats and reflected on the university’s Catholic and Jesuit identity.

As the Ignatian Year ends on St. Ignatius’ feast day, Georgetown alumni share first-person accounts of how, like the saint, they also found their lives spun toward religious paths while on the Hilltop.

‘I Never Looked Back.’

My senior year of high school, the principal called me into his office. He asked me to think about becoming a Jesuit.

He was teaching me linear algebra at the time, and he had such joy and passion when he taught. I was inspired by the way he led his life, but I couldn’t see it for myself. I was thinking more about being a father and having a wife and settling down that way.

In our meeting, he also mentioned to think about prayer more expansively. If I really enjoyed doing math or playing volleyball, that was communicating with God.

At Georgetown, I started doing those things. I played club volleyball. I took a ton of math courses, and I fell in love with theology classes. I really enjoyed music, so I was part of the daily mass community and chapel choir community. Georgetown offered all these opportunities, and I saw these Jesuit values lived in the classroom and out of it.

My sophomore year, I became more serious about discernment. I got to know more Jesuits at Georgetown. I went on an immersion trip to El Salvador to visit the site where Jesuits were martyred and to Brazil for World Youth Day. I prayed with Pope Francis and two million people on Copacabana Beach, and that was when I started seeing the blueprint of the Jesuit vocation. I started feeling a pull.

I went on a five-day silent retreat through campus ministry on my junior year spring break and had a prayer experience where everything clicked. I had a sense that Jesus was calling me, through a Jesuit vocation, to walk with him carrying his cross into the light of the resurrection. I still get chills thinking about it now. I never looked back.

“Looking back, I’m grateful because the seeds of living this life of service and faith truly began to take root and flourish at Georgetown.”

I’m back at my high school teaching the same subjects my Jesuit principal taught me. It feels like I’ve come full circle in some ways. But I have this opportunity to pay it forward. I’m offering a gift particular to me to kids who really like to pursue math. It feels very fulfilling and joyful.

Looking back, I’m grateful because the seeds of living this life of service and faith truly began to take root and flourish at Georgetown. This life has led me to live in 13 different cities over nine years. I’ve met some incredible people who are filled with faith and are inspired by the message of the gospel.

That day in high school, I had this invitation, but I sort of crumpled up the paper and threw it in the wastebasket. Thank goodness I missed.

Christian Verghese is a math teacher and director of service and justice at McQuaid Jesuit High School in Rochester, New York. He entered the Jesuits two months after he graduated from Georgetown.

‘This Is the Life That Helps Me Be My Best Self’

I grew up around sisters. My community, the Apostles of the Sacred Heart of Jesus, teaches in the school in the Bronx that I attended. My mom worked at the school, and we lived across the street.

The sisters were a normal part of my family life. I enjoyed spending time with them, but I didn’t necessarily want to be one <laughs>. But I think the first step to any vocation is wanting to pursue a relationship with God. I wanted God to be a part of my life. Over time I began to sense a call from God, but it wasn’t clear to me what exactly that call meant.

When I went to Georgetown, I met a couple of people who were discerning religious life. They were like, ‘I’m from Pennsylvania, I’m studying international relations and maybe I’m going to be a sister.’ That was the first time I met anyone my age who was considering religious life … and they seemed normal! I thought, oh wow, maybe that isn’t a crazy idea.

“It’s been eight years since I’ve entered. I can’t imagine anything else.”

Georgetown was a great place to learn and to grow and to fail. It was a supportive, encouraging environment. I loved that we had such an interfaith campus ministry life. I was able to attend Shabbat services and iftar dinners. I went to mass a lot. We developed the Catholic Student Association while I was there. My experiences at Georgetown helped deepen my prayer life and my relationship with God, which are vital to discerning a vocation.

After I graduated, I moved home to the Bronx, and I started working at the school that I went to. The question of vocation came up again. I thought, I’m not going to become any more sure about this without trying it out. So I worked at the school for two years, and I entered the Apostles of the Sacred Heart of Jesus in 2014.

When I was entering, someone asked, ‘Why do you want to do this?’ I was like, I think it’s the best way for me to love people, you know? It’s not the only way. It’s not everyone’s call. It’s no better or worse than anything else. But for me, this is the life that helps me to be my best self and to love the best that I can.

It’s been eight years since I’ve entered. I can’t imagine anything else. Sr. Allison Masserano is a junior professed sister in the Apostles of the Sacred Heart of Jesus. She is a campus minister and theology teacher at Sacred Heart Academy in Hamden, Connecticut. This photo is from her first profession of vows in 2018.

‘They Had This Enthusiastic Engagement With the World’

My first experience of the Jesuits was at Georgetown.

I auditioned for a play with Mask and Bauble. It was directed by a Jesuit. He was sitting in the theater dressed in a seer-sucker jacket smoking a cigarette under a no-smoking sign. He was the first Jesuit I had ever met, and he just confounded all my assumptions about what priests and men and women religious were like.

After rehearsal, I would often go to mass. I started going to Dahlgren Chapel even when there wasn’t mass just to sit there in the quiet. There was something there that made me pay more attention to what the Jesuits were doing, what they were like.

The Jesuits invited me to think about what faith meant and how it impacted the way you lived in the world. They had this sense of enthusiastic engagement with the world. I didn’t perceive them as retreating from the world. I perceived them as running into the world with this great energy.

I wanted to be part of that. I started to imagine, what would it look like if I joined this group of people?

“The people I’ve been able to serve and learn about and accompany — not to mention this relationship with God, who is always beyond what one can imagine — I’ve stepped into a flourishing life, and it’s been great for me.”

This year, I celebrated 40 years of graduating from Georgetown and 40 years of entering the society. A lot of my life is in the rear-view mirror at this point. And I just think it has been an incredibly rich life.

The people I’ve been able to serve and learn about and accompany — not to mention this relationship with God, who is always beyond what one can imagine — I’ve stepped into a flourishing life, and it’s been great for me.

I’m really glad I did it.

Fr. Michael Zampelli teaches in the theater history sequence at Fordham University and directs its Master of Arts in Philosophy and Society, a Jesuit formation program. He entered the Jesuits two months after graduating from Georgetown and was ordained in 1993. Before Fordham, he served as a professor and director of the Department of Theatre and Dance at Santa Clara University, where he taught for 22 years, and received his Ph.D. in drama from Tufts University. 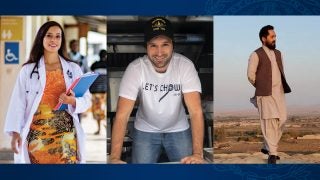 3 Alumni Making a Difference in Afghanistan, Rwanda and on a Food Truck 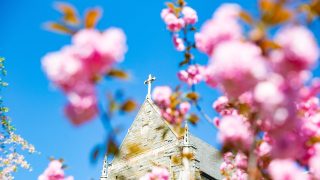