Georgetown appoints Joel Hellman, chief institutional economist at the World Bank and an expert in global conflict-affected areas and development, as the new School of Foreign Service dean.

Joel Hellman, who led the World Bank’s work in the most challenging fragile and conflict affected states, will become the next dean of the Edmund A. Walsh School of Foreign Service (SFS).

Hellman, now the World Bank’s first chief institutional economist, will begin his tenure at Georgetown onJuly 1. Serving at the World Bank since 2000, the new SFS dean is a specialist on governance, conflict and development. As a development practitioner, he has worked in nearly 50 countries across four continents.

He served as director of the World Bank’s Fragile and Conflict Affected States department, based in Nairobi, Kenya, before his current position. He also played a critical role in the World Bank’s response to the devastating tsunami in Aceh, Indonesia. In addition to serving at the European Bank for Reconstruction and Development in London, he has taught as a faculty member in the political science departments of both Columbia University and Harvard University.

He also holds a Ph.D. in political science from Columbia and an M.Phil. in Russian and East European studies from the University of Oxford. He received his B.A. from Williams College.

How can Georgetown and SFS best fulfill its role as a global university?

As we face tough challenges in the Middle East, Africa, Eastern Europe and other areas of the world, we need ideas that reflect the most innovative minds at the intersection of practice, theory and deep analysis. These are some of Georgetown’s greatest strengths. And what strikes me in all the front line development work I’ve been involved in is the importance of strengthening the capacity of individuals and the institutions they create. Many of the people I’ve worked with have been at Georgetown as faculty and students, and many will continue to pass back and forth between Georgetown and government agencies and NGOs. I think that capacity-building component, along with the university’s location in Washington, its worldwide reputation and its campus in Doha, has the opportunity to make a truly critical difference in international affairs.

What do you think makes Georgetown unique? 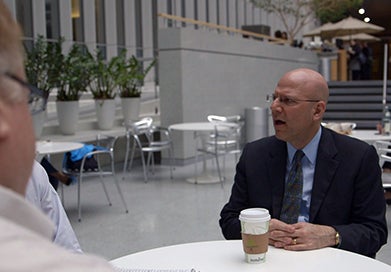 Joel Hellman, the World Bank’s first chief institutional economist, will begin his tenure as dean of the School of Foreign Service on July 1.

Georgetown has a longstanding commitment to the Jesuit values of service, of education and of social justice. “Service” is in the title of the school. That means that SFS isn’t just a school of international affairs, it’s a school that applies the ideas of international affairs to service and to the global community. Georgetown has the power to engage and study and understand so many nations around the world. Whether it’s Ebola in Africa, the rise of new global powers, the threat of trans-national terrorist groups, Georgetown can bring to bear its expertise in a host of disciplines to make a real difference in the world.

Georgetown’s School of Foreign Service helped to create an American foreign service cadre trained to project U.S. influence abroad. What’s needed now in international affairs is very different than what we needed 100 years ago. While still important, the foreign service corps is only a small piece of the puzzle. SFS has the capacity to create a significant impact on the world in partnership with the university’s law school, medical school, McCourt School of Public Policy and McDonough School of Business. These schools combine together areas of technical depth and expertise. This is part of the reason why I’m so excited about coming to Georgetown.

What experience in your time at the World Bank most stands out for you?

Working with the Government of Indonesia on the World Bank’s response to the tsunami in Aceh and North Sumatra. This was total destruction – a devastating natural disaster after almost a decade of conflict. It was a great privilege to be able to work with a very strong Indonesian team that led the response in Aceh. We were able to come in and support their efforts to rebuild their homes, infrastructure and society. It was a tremendously important learning experience for me, and a remarkably successful reconstruction. That area is now thriving.

Can you tell us a little more about yourself?

I was born and raised in Brooklyn and didn’t travel anywhere until after college. Since then, I’ve been on an almost non-stop ride of traveling, working in more than 50 countries and living with my family in Indonesia, India and Kenya. We have had a wonderful opportunity to live in lots of different cultures and experience numerous religious traditions.