Title: Use of Child Care Subsidies Linked to Enrollment in Head Start, Pre-K

Children of parents using child care subsidies to purchase center-based care for their toddlers are more likely to later enroll them in Head Start or public pre-kindergarten programs, according to a new study published today in the journal Child Development.

“Our study highlights a previously unconsidered benefit of the subsidy program,” says Anna Johnson, an assistant professor of psychology in Georgetown College who led the study.

“If subsidies at an earlier age, when Head Start and public pre-kindergarten are not yet widely available, help move children into those programs when children become age-eligible,” she says, “then subsidies may provide another avenue through which policy can strengthen the early development of low-income children.”

Johnson collaborated on the research, which used nationally representative data on approximately 2,100 families eligible for subsidies, with Rebecca Ryan, also an assistant professor of psychology at Georgetown, and Anne Martin of Columbia University. 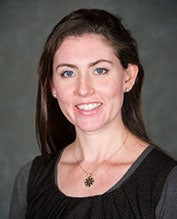 The federal Child Care and Development Fund (CCDF) serves nearly 2 million children a month and is one of the government’s biggest investments in the early care and education of low-income children, Johnson notes.

While the CCDF program was designed primarily to support parental employment, it does have a secondary focus on increasing children’s access to high-quality care; nevertheless, CCDF-funded child-care settings vary in the extent to which they have an explicit educational focus.

In order to enhance outcomes for vulnerable children, we need to reach more children as early as possible and increase their exposure to care that prepares them for academic success,” she adds.“Expanding the subsidy program to serve more of our youngest children might be one way to do that.”

In the study, researchers investigated whether receiving a CCDF subsidy for children who are 2 years old might increase the likelihood of them participating in Head Start or public prekindergarten when the programs become available for children ages 3 and 4.

Other Georgetown research has demonstrated the value of Pre-K programs.

William Gormley of the McCourt School of Public Policy and psychology professor Deborah Phillips, co-directors of the Center for Research on Children in the U.S. (CROCUS), have written extensively about Oklahoma’s universal pre-K program in a series of articles published over the past decade.