U.S. Poet Laureate Tracy K. Smith speaks at the university as part of the “Faith and Culture Lecture Series” sponsored by the Berkley Center for Religion, Peace and World Affairs.

Smith, who became poet laureate last month, spoke at the university Oct. 26 as part of the “Faith and Culture Lecture Series” initiative of the Office of the President, which co-sponsored this event with the Berkley Center for Religion, Peace and World Affairs. 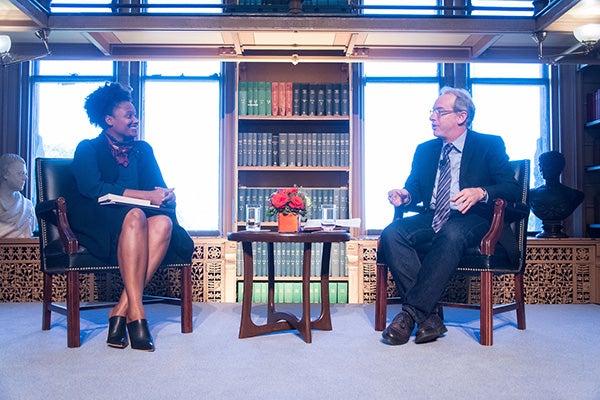 The ongoing program, moderated by Berkley Center Senior Fellow Paul Elie, asks writers to reflect on their work in the context of faith’s engagement with culture.

Smith said she hopes to use her position to encourage deeper civic dialogue in America.

“What’s really interesting for me is to think about how those strong convictions that have to do with principle and feeling can live in a conversation about language, which is what I’ve been asked to foster,” Smith said.

Poetry is a perfect vehicle for promoting national conversations, she said, because it “tells us you have to talk but you also have to stop and listen and struggle with what you hear. And honesty, rather than elaborate obfuscation, is the currency of a poem.”

Smith said that praying was a regular part of her daily routine growing up, but that she began to develop questions about her beliefs when she got older.

“I’ve struggled with faith, what I want to call it, what it means, what group it means I belong to,” Smith said. “The writing of my last two books particularly enact that, and I think they help me come to a place where I’m willing to say, ‘Yes, I need to pray. I pray.’ ”

Elie said after the event that Smith’s poetry and prose are “suffused with the language, attentiveness to the spiritand sense of personal duty that she has carried forward from her Baptist upbringing, but these aspects of her work don’t often feature in the conversations about it.”

“So it was a privilege to put them front and center in our conversation,” he said.

Initially, writing poetrywas “just an act of meaning-making” for Smith.

“But I could also come to recognize in what I was saying about my writing and other people’s writing something that felt similar to what is said in the church or what is said in the word of God,” she explained. “We talked about our poems in workshop as though they were people.”

As a young writer, Smith said she was driven to poetry by its ability to make meaning out of the smallest things.

“What poems require you to do is slow down and look closely at something small, even if the poem is something huge, it’s looking at these small details and it felt like magic the way that these things could be transformed into other things,” Smith said. “And I wanted to find ways of making the world that I knew but was still sort of mystified by better and clearer.”

She said poetry’s ability to change the way things are perceived continues to appeal to her.

“I’ve touched something now and it’s different and it will always be different,” Smith said of her feelings after writing poetry. “And that just felt so useful to me. It was hard to imagine what else would be that useful.”

Wade in the Water

Smith showcased some of her newest poems at the event, including “The Angels” and “Unrest in Baton Rouge,” that will be included in a forthcoming collection of poems titled Wade in the Water.

The book of poems focuses on the themes of love, compassion, universal benevolence and the ways in which those qualities “trouble the water.”

She said the ability of love to serve as a disruptive force has always fascinated her.

“Thinking about love as that force that’s disruptive made sense, especially when I think about so many things that demonstrate that we are willing to defend ourselves against love very aggressively,” Smith said.