The Southern region of the United States is a decade behind the rest of the country in developing high-wage, high-skill jobs that require postsecondary education, according to a new Georgetown study. 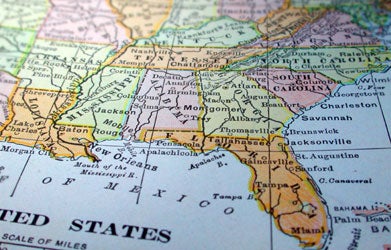 “Over the past decade, for the first half of the decade, [the South was] gaining on the rest of the American states and it looks as if in the last few years and looking forward that the South is beginning to lose ground again,” says Anthony P. Carnevale, director of Georgetown’s Center on Education and the Workforce.

The university’s Center on Education and the Workforce recently released a study that says the South will need 57 percent of its jobs to require some form of education beyond high school by 2020.

The study also indicates that the South, despite having relatively strong job growth compared to the rest of the U.S., is stuck in an economic cycle called low-wage, low-skill equilibrium, when supply and demand for skilled workers lies on the lower end of the wage and education scales.

A number of Southern news organizations, including The Sun-Sentinel in Fort Lauderdale, Fla., and The Birmingham News in Birmingham, Ala., ran stories about the research.

“This is undesirable because both educators and employers become dependent on an economic and technological pathway that suppresses wages and discourages human capital development,” the study reports.

The result is a brain drain of the region as highly skilled and educated workers leave to find better jobs.

The study, “A Decade Behind: Breaking Out of the Low-Skill Trap in the Southern Economy” notes that 65 percent of all jobs in the United States will require some form of postsecondary education and training by 2020.

“Over the past decade, for the first half of the decade, [the South was] gaining on the rest of the American states and it looks as if in the last few years and looking forward that the South is beginning to lose ground again,” says Anthony P. Carnevale, the center’s director and study co-author.

“Brain drain tends to occur when your state is not producing jobs for college-educated workers or people with a degree or technical certificates,” Carnevale says, adding that brain drain was particularly high in West Virginia and Louisiana. “Generally what happens is if you produce more college-educated workers than people are looking for and the wages aren’t as high as elsewhere, the people would leave.”

Although the South is strong in developing jobs in government and health care, it needs to develop better jobs in other sectors than “low-skill” industries and invest more in education to prevent falling behind further, the study shows.

“The South in a way has a structural problem,” says Carnevale. “It’s in the wrong lines of business and needs to break out into more high-skill, high-wage industries.”

According to Carnevale, this is not the first time the South has fallen behind the rest of the country in developing high-skill, high-wage jobs that require postsecondary education.

“The South was still behind but it was catching up in the 80s and 90s,” he explains. “What we’re seeing here – and it began before the recession – is the South, the rate of increase is slowing down. … They need to run faster if they want to catch up.”