The ability of hip-hop to bring wealth to artists growing up in poverty is great, but the genre is lacking in artistic responsibility, rap icon Nas said last night at Georgetown.

“I don’t see enough MCs who are brave enough to be honest,” he said during a talk with Michael Eric Dyson, university professor at Georgetown. “There’s a lot of good stuff and a lot of bad in rap.”

“The socially conscious stuff can come off as preachy,” he explained. “ … some people stay away from that. It’s not their bag, but they still have some kind of artistic responsibility to do more than what’s the latest trend.”

The event, moderated by James Peterson, director of Africana studies and associate professor of English at Lehigh University, took place the evening before Nas’ March 28 and 29 performances at the Kennedy Center’sOne Mic:Hip-Hop Culture Worldwidecelebration that runs through April 13.

Georgetown will collaborate again with the Kennedy Center for the One Mic celebration with “Faith, Hip-Hop, and the Common Good” on April 9.

“This guy is a rhetorical genius,” said Dyson, who co-editedBorn to Use Mics: Reading Nas’s Illmatic (Basic Civitas Books, 2010). “To me, teaching Nas, teaching hip-hop, teaching Jay-Z, [Tupac], Biggie [and] Lauryn Hill is about excavating in the common earth of our social existence not only relics and artifacts of their genius, but the ongoing engagement with the most serious level of literacy.” 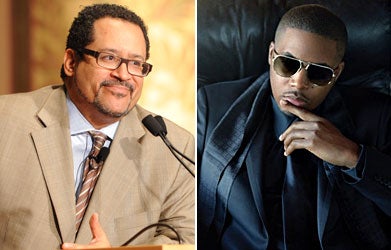 Dyson and Peterson agreed that Nas’ albumIllmatichas remained a classic for so long because of the issues that it touches upon – such as loss, misogyny, the drug culture, the prison industrial complex, the struggle for black self-definition and the function of literacy in the quest for self-awareness and spiritual and moral evolution.

And while Nas rapped about these issues 20 years ago, all three men said many of the issues remain.

“The problem is out of hand with the amount of blacks, Latinos and poor whites who are thrown in jail and [without] really a chance to get out,” Nas said.

He likened the system of incarcerating youth from these demographics as a railroading process.

“We know how easy it is to be profiled. When I was 15 [or] 16, we were hearing how most of us black men won’t make it to be 25,” he recalled. “So, we were … on the hurry-up process – get money now, live now, have kids now, everything now – because tomorrow was not promised for the situation that we were in.”

Today, it’s about showing people from places like his Queensbridge neighborhood in Brooklyn that there are alternatives, Nas said.

“We don’t have anymore time to waste,” he added. “We need people to show them business modules and how they can get into computer programming, get into real estate, get into engineering, get into all the things that … are making this country better.”

[Nas] is a rhetorical genius. To me, teaching Nas, teaching hip-hop, teaching Jay-Z, [Tupac], Biggie [and] Lauryn Hill is about excavating in the common earth of our social existence not only relics and artifacts of their genius, but the ongoing engagement with the most serious level of literacy.”

Nas, who was born Nasir bin Olu Dara Jones, has sold more than 20 million albums worldwide over the span of his career and acted as an ambassador for hip-hop culture across the globe.

He’s released nine solo albums and three compilations since releasing Illmatic– all of which have been certified double-platinum, platinum and gold.

Dyson believes the works of Nas should be studied along with the works of American authors Ernest Hemingway and Toni Morrison.

“Nas is worthy of the highest critical and academic celebration in the nation,” Dyson said. “The Harvard recognition, as well as the publication of a book about Nas’ first album, offers powerful testimony to Nas’ elevated artistic and cultural status.”

Last year, Harvard University established the Nasir Jones Hiphop Fellowship to fund opportunities for scholars and artists whose works are connected to hip-hop.

This year marks the 20th anniversary of Nas’Illmatic, and he’s celebrating with the release of a new album,Illmatic XX, set for release on April 15.

His March 29 Kennedy Center performance with the National Symphony Orchestra will kick off the tour for his new album.

For Nas, the Kennedy Center performance, the Harvard fellowship and courses on hip-hop music and culture are dreams realized.

“I had dreams of that kind of stuff early,” he said at Georgetown. “I didn’t think it was really possible … but now that it’s here … it feels like this is where it’s supposed to be.”