The Dolphins of Shark Bay (Houghton Mifflin Harcourt, 2013) by Pamela S. Turner is part of the publishing company’s “Scientists in the Field” series, which seeks to make science more accessible to young readers.

“I’m thrilled about this opportunity to share my research with a young audience through this book,” says Mann, who has studied dolphin behavior for more than 25 years. “It’s never too early to start exploring the wonders of the world around us, and I hope it inspires children to become interested in science and nature.”

Mann, who is vice provost for research at the university and a professor of biology and psychology in Georgetown College, has made major discoveries about dolphin mothers handing down the use of tools such as sponges for foraging to their calves. 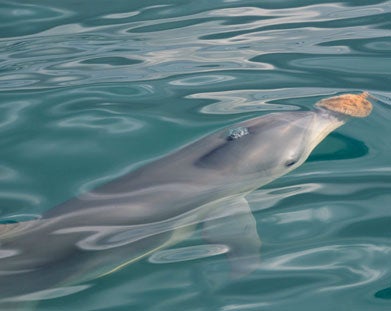 Georgetown professor Janet Mann discovered that dolphin mothers hand down to their calves the use of sponge tools, such as the one being used by this dolphin, for foraging.

The National Science Teachers’ Association named the children’s book, which includes photographs by Scott Tuason, a 2014 Outstanding Science Trade Book for Students K-12. It also has received positive reviews from Kirkus, School Library Journal and The Bulletin of the Center for Children’s Books.

Aimed at children ages 10 and up, the book details Mann’s journeys with dolphins in Western Australia. One chapter focuses on the group of dolphins that use sponges as tools to protect their beaks or “rostra,” and more easily find food when they fish on the floor of the bay.

Turner describes how a college trip to Kenya to study baboons inspired Mann to pursue a lifetime of research.

“Kenya changed my life,” Mann says in the book.

The book explores the dramatic lives of dolphins, including Mann’s discovery that some of them form cliques.

“If the dolphins of Shark Bay have taught us anything, it’s that they don’t conform to our myths,” Turner writes.

“Like us, they are something far more interesting: creatures with lives juicy with drama and crammed with complications,” the book states. “And their big brains offer them the same thing our big brains offer us: possibilities.”