Title: Poet Reflects on Catholic, Jesuit Influence on His Imagination in Literature

Award-winning poet Lawrence Joseph shares how his Jesuit education and growing up in 1960s Detroit informs his imaginative work during a recent Faith and Culture Lecture Series talk at Georgetown.

February 8, 2018 – Award-winning poet Lawrence Joseph said his Jesuit education and growing up in 1960s Detroit informs much of his imaginative work during a recent Faith and Culture Lecture Series talk at Georgetown.

“If your imagination has a fundamental foundation in Catholicism, your sense of the world is very much affected by that,” explained Joseph, author of So Where Are We?, a collection of poems. “It’s a faith of language. It’s the Word made flesh.”

Joseph, the grandson of Lebanese and Syrian immigrants, described his upbringing as “fiercely Catholic,” attending a Catholic school and going to Mass on a daily basis.

He said his Jesuit high school education exposed him to the exploration of justice from a Catholic perspective, including the Civil Rights Movement in the early 1960s.

The author read several poems from his latest work – including the title poem, “So Where Are We?” – during the event, which was also part of the university’s Jesuit Heritage Week.

The piece shares the violence, fear and confusion of the 9-11 terrorist attack and its aftermath. 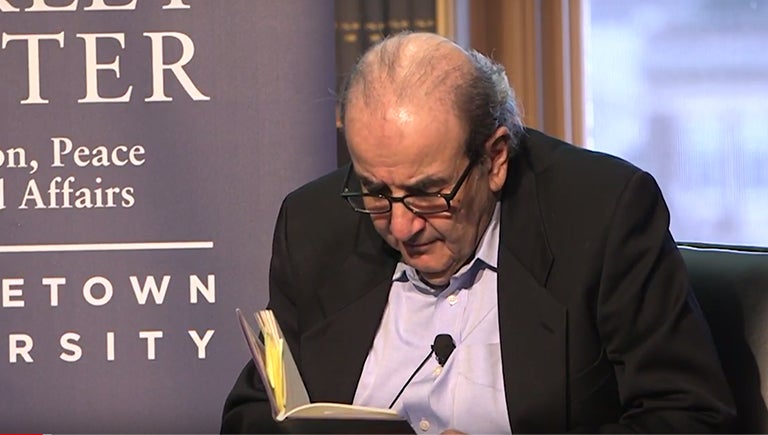 Poet Lawrence Joseph reads from his collection of poems during the Faith and Culture Lecture Series in Riggs Library.

Fire in the Streets

Elie noted that fire, and the “fire of violence,” are recurring themes throughout Joseph’s work.

“I think it goes into the spirit, the Holy Spirit, when I’m dealing with an imaginative fire … that comes from that whole language of my childhood,” Joseph explained.

The “liturgical language” of fire also coincided with Joseph’s life outside church. He described seeing his father’s liquor store set afire and ransacked during the 1967 riots in Detroit.

“I saw fire in the streets,” Joseph said. “The city was on fire … It was totally out of control.”

Despite the presence of despair and sorrow throughout Joseph’s poetry, he still sees the persistence of beauty and hope within them.

“I see hope very much. It’s one of the theological virtues,” he said.

“If you’re having trouble with hope, just focus on what you believe in … Focus on love.”