Regents Hall, Georgetown’s new home to multiple science departments, is earning praise from students and faculty for its advanced equipment and collaborative opportunities.

OCTOBER 1, 2012REGENTS HALL, GEORGETOWN’S NEW, state-of-the-art science building is receiving rave reviews from students and faculty only a few weeks into the start of the 2012-13 academic year.

“I think this building is a great physical representation of everything that goes on here and I think it will be a great way of attracting more students who are interested in science,” says Wardah Athar (C’13), a neurobiology major. “For me personally it means that I have a great new space to experiment … and I think for the university as a whole … it’s a great way to showcase the science that goes on here.”

Faculty and students are already conducting a wide variety of research within the new building.

A key aspect of Regents Hall is how the building is designed to facilitate and increase interdisciplinary collaboration, interaction and research. 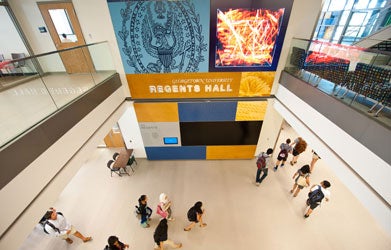 “In Regents Hall, what you find if you go to a research floor is that you have a lab of a biologist right next to the lab of a chemist,” Whitmer explains. “These are folks who have been collaborating over the last several years or who have research or techniques or interests that are similar.”

The easy access to other researchers and open spaces for studying and experimentation is resonating positively with faculty and students.

“This new building is just a fantastic space, it’s big and it’s open and the students and I are interacting minute-to-minute,” says Ronda Rolfes, associate professor of biology.

She says she enjoys being able to walk in and out of the lab so students can process data and conduct research independently.

Students believe the building is a big step forward for science and research at Georgetown.

“It can only help Georgetown’s standing to being more and more committed to science programs,” says Brooks Culotta (C’13), a chemistry major who described his new analytical chemistry lab space as “spacious” and “functional.”

Regents Hall’s completion also opened up an outdoor quad connecting the new building and its Royden B. Davis, S.J., Teaching Garden (used for educational plantings and experiments) with the student Leavey Center and the business school’s Hariri Building.

I think this building is a great physical representation of everything that goes on here and I think it will be a great way of attracting more students who are interested in science.”

In 1962, Georgetown opened its original science building (Reiss), which was home to the biology, chemistry and physics departments.

These disciplines are now served in Regents Hall with improved labs, better technology and additional work and social space.

Among its many attributes, the new building houses the Institute for Soft Matter Synthesis and Metrology, launched at Georgetown with a $6.9 million grant from the National Institute of Standards and Technology.

The institute studies and researches materials, such as gels and biological tissues. Soft matter is found in everyday items such as shampoo, toothpaste and face cream, but may one day have a much wider application in areas such as sustainability and energy storage.

Physics labs in the building have advanced resources and equipment to study nanotechnology fabrication and soft matter, including high-powered microscopes that can produce three-dimensional images of structures.

Jeffrey Urbach, the physics professor and director of the soft matter institute, was recently named Georgetown’s Interdisciplinary Chair in Science.

He says there are many attributes that will make his and other scientists’ research more effective.

“One of the big pieces is just having a well-controlled environment,” he says. “We do a lot of sensitive experiments and this building was designed with these experiments in mind, and so the air handling and other things are of much higher quality.”

Georgetown is seeking LEED (Leadership in Energy and Environmental Design) gold certification for the facility’s sustainability features, which includes the use of renewable materials for construction and furnishings and recycled rainwater for landscaping.

“I really like that the building [will be LEED certified],” says physics major George Burton (C’13). “I am … interested in physics energy research, particularly renewables for electricity.”

Burton says he first became interested in the field after going on an Alternative Spring Break trip to Appalachia through the Center for Social Justice at Georgetown.

“I was introduced to mountain-top removal and I am now determined to find better solutions to our energy problem,” he says. “Since I am a physics major, I naturally decided to go into physics research in renewable energy.”

SCIENCE AND THE JESUITS 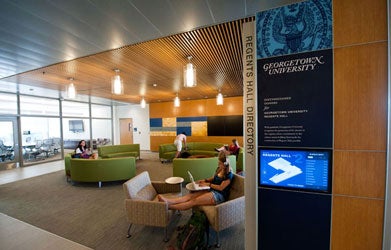 “There’s a lot of social space built into this space intentionally,” says College Dean Chester Gillis. “We don’t want it simply to be for scientists … the public spaces should be inviting to all students and that is what we have done in Regents Hall.”

Sheila Sherzoy (C’13) is taking a Neurodisorders and Mammalian Physiology lab in the new building and is also a teaching assistant for a genetics lab.

Hoping to attend medical school next year, Sherzoy says she sees a link between the building and Georgetown’s Catholic and Jesuit heritage.

“In terms of a Jesuit education, being familiar with the sciences is an integral part ofcura personalis (education of the whole person),” she says.

“The Jesuits are known as scientists historically,” notes Chester Gillis, dean of the College. “[They] have been involved in explorations, in cosmology and in hard science since the founding of the religious order.”

He adds that today, “…our society and our culture depend so much on scientific innovation and discovery and we must be a part of that, we must lead that.”

NOT JUST FOR SCIENTISTS

Gillis hopes all students will utilize study spaces in the new science building.

“There’s a lot of social space built into this space intentionally,” he says. “We don’t want it simply to be for scientists … the public spaces should be inviting to all students and that is what we have done in Regents Hall. I think it will be really a convening place for students.”

For students such as Culotta, who came to Georgetown knowing he would study science, Regents Hall introduces a new era at the university.

“…I’m excited for the possibilities for the university to bring in new students … and to raise its standing in more [scientific] areas,” he said.