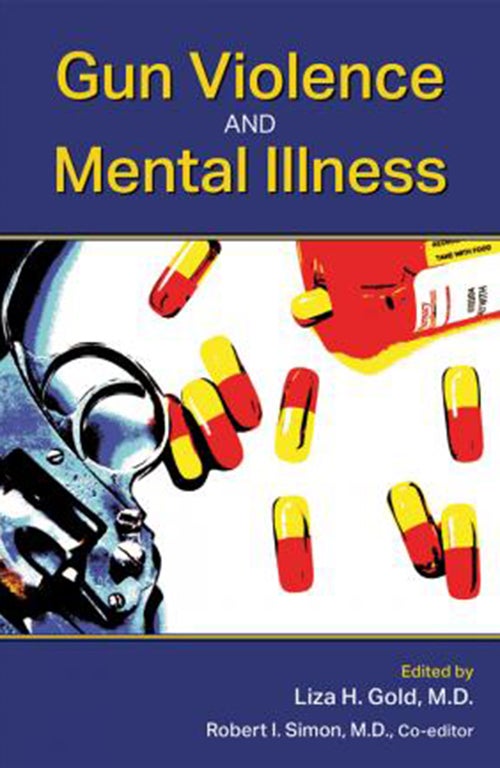 The writers of Gun Violence and Mental Illness, published by American Psychiatric Publishing, Inc., come to those conclusions through reviews of research and clinical evidence regarding gun violence and mental illness.

The book also suggests evidence-based interventions to reduce morbidity and mortality of both problems.

“Most people believe that the intersection of mental illness and gun violence is found in the tragic mass shootings that grab headlines,” explains says one of the book’s editors and contributing writer, Dr. Liza H. Gold, a GUMC clinical professor of psychiatry. “That misconception, reinforced by media coverage, comes from the negative stereotype that people with mental illness are dangerous.”

Despite horrific tragedies such as the Sandy Hook massacre of innocent children, she notes that less than one percent of firearm deaths each year occur in mass shootings.

Gold says most people are surprised to learn that two-thirds of the approximate 33,000 annual firearm deaths in the United States are due to suicide. As many as 90 percent of those who take their own lives have a psychiatric diagnosis “rendering suicide the real intersection between mental illness and gun violence,” Gold says.

The vast majority of the 11,000 or so homicides each year are interpersonal in nature, she says, committed “by individuals who are angry, violently impulsive, and often fueled by alcohol or drugs, but are not committed by individuals with mental illness.”

Gold adds that the book also reveals that the primary cause of all types of firearm violence in America is access to guns. “However, categorically restricting gun access to individuals based on negative stereotypes is an ineffective approach,” she says. “In contrast, restricting firearm access even temporarily to people who are at high risk of fatally harming themselves or others, whether they have a mental illness or not, has been demonstrated to decrease both firearm suicide and homicide rates.”

The book, co-edited by Dr. Robert I. Simon, also a clinical professor of psychiatry at Georgetown, aims to look beyond the inflammatory social and political rhetoric that often surrounds discussions of U.S. gun violence.

Contributing authors are leading professionals in the fields of mental health, law and public health who emphasize the need for scientific evidence to guide effective policy.

“As psychiatrists, we are acutely aware that the U.S. mental health system is ‘broken,’ ” Gold says. “There is a shameful lack of mental health resources available to treat those with serious mental illness. Many end up in jail, often for relatively minor offenses.”

Gold explains that the institutions housing the largest number of people with mental illness are correctional facilities such as New York’s Rikers Island, Chicago’s Cook County Jail and the Los Angeles County Jail.

“Addressing the serious problems in the provision of mental health care could reduce rates of suicide, but will not decrease gun homicide rates,” she says.

Gold will speakabout reducing gun violence on December 4 at the “Moving from Crisis to Action: A Public Health Approach to Reducing Gun Violence” conference at Emanuel A.M.E. Church in Charleston, S.C., where nine people were killed in a mass shooting nearly six months ago.