Supreme Court Justice Ruth Bader Ginsburg speaks at Georgetown’s Bernstein Symposium about gender bias, her time on the court and her 2016 book.

“For you, the challenges are more daunting than the ones we faced,” she said, in response to a question from Ally Ross, a first-year student in the School of Nursing & Health Studies from Dayton, Ohio.

“I spoke before about there being explicit gender lines in the law, so women can’t be firefighters, can’t be police officers, can’t be pilots of planes,” Ginsburg said, speaking of life for women in previous decades. “Those doors are now open to you, but what’s left is what is called unconscious bias.” 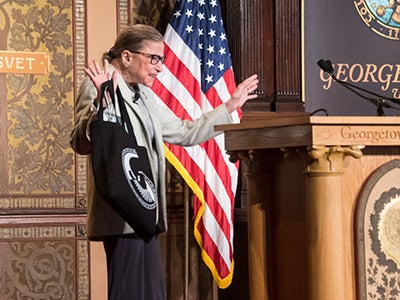 Ginsburg was at Georgetown for the university’s Bernstein Symposium, designed to provide ongoing discussions with scholars, policymakers and students about challenges and opportunities confronting public institutions.

The symposium is named for the late Marver H. Bernstein, a former professor of politics and philosophy at the School of Foreign Service at Georgetown.

Ginsburg wrote her 2016 book My Own Words with Hartnett and Williams. The book contains a wide range of Ginsburg’s writing – beginning with an editorial she wrote for her middle school newspaper in 1946 to highlights from the court’s 2015-2016 sessions.

Robert A. Katzmann, Chief Judge for the United States Court of Appeals for the Second Circuit and an assistant to Ginsburg in her 1993 confirmation process, moderated the conversation as well as a subsequent question-and-answer session.

Katzmann said Ginsburg is a “national icon” and noted that she is the subject of several books, pop art, T-shirts and a forthcoming movie starring actress Natalie Portman.

She is admired for her advocacy for women’s rights as a lawyer and her impact on the Supreme Court, he said, “But I think it is also because the American public admires her character, her values and feel a connection with her.” 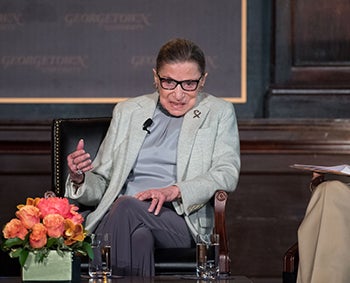 During the question-and-answer session, Ginsburg noted a court case in which women working at AT&T claimed they were being passed over for middle management jobs, which they saw as a violation of Title VII of the Civil Rights Act.

The women met all the standard criteria for the jobs, Ginsburg said, but failed to be promoted after the interview process.

“It wasn’t a deliberate attempt to screen out women, but the interviewer had a certain comfort level facing someone who looked like himself,” she explained. “If he were confronting a member of a minority group or a woman, there was a strangeness, he felt uneasy. It’s getting over that unconscious bias that remains a problem.”

Ginsburg also spoke about her confirmation process, noting that conservative Sen. Orrin Hatch (R-Utah) was her “biggest supporter” on the judiciary committee at the time.

“What I remember was the collegiality, the civility of those hearings, the entire process,” she said. “… There was truly bipartisan spirit in the Congress …Watching the most recent confirmations, I wish there was a way we could wave and magic wand and get back to the way it was and the way it should be.”

The second woman ever nominated to the nation’s highest court also talked about her husband, the late Georgetown law professor Martin Ginsburg.

“Marty was the first boy, probably the only boy that I had ever known, who cared that I had a brain,” she said of her husband, whom she met as an undergraduate at Cornell. “… Marty, for all the 56 years we spent together, he was always my biggest booster.”