Queen Rania Al Abdullah of Jordan calls for greater awareness of and support for the refugees fleeing Syria during a visit and documentary film screening at Georgetown.

– Queen Rania Al Abdullah of Jordan called for greater awareness and support for the plight of the millions of refugees fleeing Syria during a visit and documentary film screening at Georgetown on April 14.

Despite the significant strain on Jordan’s infrastructure, she said her country and its people have remained hospitable to the 1.3 million Syrian refugees who have been granted asylum there, providing safe harbor and access to critical services such as healthcare and education.

“The people of Jordan have opened their homes and their hearts, their schools and health centers and extended the hand of friendship to those in desperate need,” said Queen Rania, speaking to more than 700 people in Gaston Hall before a screening of Salam Neighbor. “And I could not be more proud of their selflessness, their sacrifice and their kindness.”

The documentary follows American filmmakers Zach Ingrasci and Chris Temple, creators of the film Living on One Dollar and co-founders of the social impact film studio Living on One, as they stay amongthe 85,000 Syrians who reside in Za’atari, the biggest refugee camp in Jordan.

“What I love about this film is theresilienceit reveals,” she said before the screening.“For all that our neighbors have suffered, they have not abandoned hope. We see people who have nothing finding ways to share everything.”

The queen said the film takes people beyond the headlines and labels to show how the refugees really are.

“Parents and children. Teachers and students. Neighbors and families and friends. Human beings with human ambitions, human emotions and human needs. People to befriend, not to be feared,” she added. 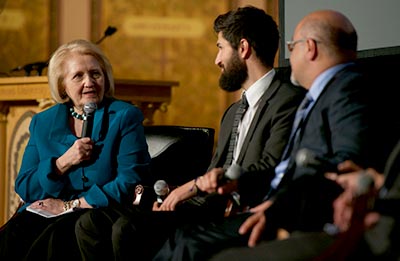 Reality on the Ground

Melanne Verveer, executive director of the Georgetown Institute for Women, Peace and Security, and David Miliband, president and CEO of the International Rescue Committee (IRC), also delivered remarks before the film.

“The plight of women and children, who comprise four out of five refugees who have fled Syria, is a tragic consequence of the conflict,” said Verveer, who served as U.S. Ambassador for Global Women’s Issues before joining Georgetown. “It is films likeSalam Neighborthat allow us to more deeply understand the reality on the ground, reminding us of our collective responsibility to act.”

Salam Neighbor, available for digital pre-order on iTunes and slated for release on May 6, has partnered with the U.N. Refugee Agency, and two nonprofits, the IRC and Save the Children, to raise funds for programs to help refugees.