Armond Esmaili (NHS’11, M’15) first became inspired to pursue a career in medicine in high school after his mother was diagnosed with a rare autoimmune disorder. 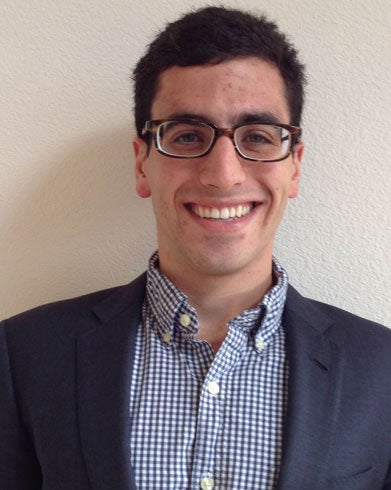 Armond Esmaili says it was a “tremendous honor and deeply humbling to have been selected as a Rhodes finalist and invited to interview” for a chance at earning the prestigious scholarship.

“It was during the hours I spent with my mother at her hospital,” says Georgetown medical student Esmaili, “[that I observed] the compassionate care provided by her physicians and discussing the medical complexities of her illness with doctors and became inspired to … gain expertise in the biological science that underlies human health and illness.”

Before becoming a student at Georgetown’s School of Medicine, Esmaili graduated at the top of his class from the university’s School of Nursing & Health Studies (NHS) as a human science major in 2011. He earned NHS’ Dean’s Award for Highest Cumulative Grade Point Average that year.

A Rhodes scholar finalist this past November, Esmaili was one of 11 Georgetown students selected to participate in an internship in Buenos Aires during his undergraduate years at Georgetown that involved coursework, lab research and hospital visits related to pediatric respiratory syncytial virus (RSV) infections.

Pablo Irusta, associate professor of human science at Georgetown, oversaw Esmaili’s research in the lab at Georgetown and during the trip to Argentina.

“While in Argentina, his questions and work ethic impressed physicians and researchers alike,” Irusta wrote in his recommendation letter for the Rhodes scholarship. “He was really passionate about working with children and trying to better understand the disease that affected them.”

Despite not being selected, Esmaili says it was a “tremendous honor and deeply humbling to have been selected as a Rhodes finalist and invited to interview” and that he is grateful to John Glavin, English professor and fellowship secretary at Georgetown.

“[Glavin] and the fellowship process challenged me to do precisely what my undergraduate and medical education at Georgetown have spurred me to do in the past six years,” he says, “to reflect critically upon my experiences and ask how I can use the knowledge and insights of my education to better engage my community and serve others.”

In Buenos Aires, Esmaili says he was able to “experience firsthand how discoveries in the laboratory are translated to clinical care.”

A native of Evergreen, Colo., he also performed cell biology research under Irusta’s mentorship as an undergraduate that led to a collaborative publication in the journal Cell Cycle.

“At National Jewish, my work focused on understanding how a particular cell in our immune system can damage lungs in respiratory illnesses and how we can prevent this disease process from occurring,” he says.

At Children’s Hospital Los Angeles, he says he “helped advance the development of a novel therapy that may soon be used in the treatment of pediatric bone cancer.”

Although he says he is passionate about scientific discovery in the fields of immunology and oncology, he hasn’t yet to selected a specialty field.

“It is my foremost goal as a future physician to provide care for individual patients,” he explains, “but in addition to clinical care, I also hope to move my research beyond the scope of the microscope and to examine how health systems can better delivery therapies and prevent illness for patients most in need of care.”

Esmaili was among four Rhodes finalists this year from the university. Georgetown has a total of 23 Rhodes scholars, including President Bill Clinton (SFS’68).

He says the university’s Jesuit tradition of helping others is why he came to Georgetown as an undergraduate and stayed to pursue a medical education.

During his years at Georgetown he has served as a coordinator of a science tutoring program at NHS, as a volunteer and board member with Georgetown’s Best Buddies chapter, which works with adults with intellectual and developmental disabilities. He also has worked as a volunteer coordinator of an annual charity basketball tournament and as an admissions ambassador for the university.

“I am extremely grateful to all of my professors who have shaped my spiritual and intellectual growth,” he explains, “and challenged me to embrace a future serving others.”