Dignitaries including former first lady of the Czech Republic and Georgetown professor Madeleine Albright attended the dedication to a living memorial for the late Czech president Václav Havel.

The former first lady of the Czech Republic, other dignitaries and professor Madeleine Albright were on hand yesterday for the dedication of a living memorial at Georgetown to the late Czech playwright, dissident and president Václav Havel.

A prominent Czech architect and friend of Havel’s who designed the famous Prague Castle – Bořek Šípek – created the “Democratic Bench” that is now part of memorial.

A Legacy of Freedom 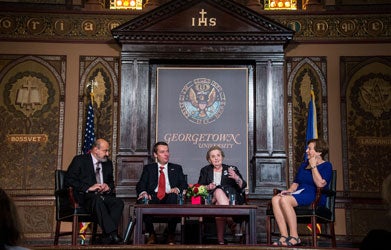 Havel spoke at the university in 1990, only a year after communism fell in his country, and again in 2005.

“During [his visits] he spoke to our community about the importance of freedom – freedom of thought, freedom of expression, the freedom to engage in political discourse and the free exchange of ideas,” said Georgetown President John J. DeGioia during the dedication ceremony. “… It is in these core beliefs that we feel a deep resonance with Václav Havel’s life and legacy and this is why it is a privilege to dedicate Václav Havel’s Place today.”

Dagmar Havlová, Havel’s wife and former first lady of the Czech Republic, cut the ribbon that officially opened the memorial. 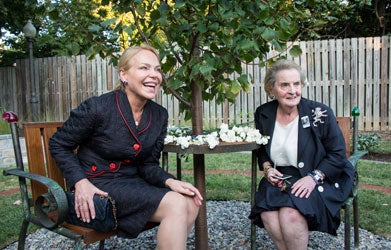 Before the dedication ceremony, Albright, who was U.S. Secretary of State from 1997-2001, took part in a panel discussion in Gaston Hall with Monsignor Tomáš Halík, former Havel advisor and sociology professor at Charles University in Prague, and Šimon Pánek, former Czech student activist and executive director of People in Need.

Born in Prague, Albright recalled her first meeting with Havel during a visit to the Czech Republic in January 1990, the year Havel first came to Georgetown to receive a medal for his nonviolent push for democracy.

“I happened to have a book of my father’s with me, he wrote 20th Century Czechoslovakia, and Havel was meeting with some Americans,” Albright said. “So I gave him this book and he said, ‘I know who you are, you’re Mrs. Fulbright!’ And I said ‘no, I’m Mrs. Albright.’ And thus began one of the truly great friendships.”

Havel’s last visit to the university, in 2005, involved a public discussion of politics and culture with Albright.

Halik described how Havel’s message of “truth and love must triumph over lies and death,” resonated during the Velvet Revolution and thus putting the playwright into the spotlight of the revolution.

“During the dramatic weeks of fall 1989, the writer, playwright and dissident Vaclav Havel who had only been known by a small section of society soon became a voice of the revolution and soon after the head of state,” said Halik. “In a very short space of time his voice and face as well as his texts and his political and foreign message were known and respected on both sides of the Atlantic.”

Angela Stent, Georgetown’s director of the Center for Eurasian, Russian and Eastern European Studies and panel moderator, marveled at Havel’s “sincerity and conviction” during his 1990 visit at Georgetown.

“Perhaps the most surprising thing for us is that … President Havel deferred to some of the students that he had on the stage with him,” Stent said. “He asked their opinion about issues on what they thought was happening in the world … I challenge you to name any other president that you can think of from any [foreign] country who would defer to students, asking and listening to their opinions and taking them very seriously.” 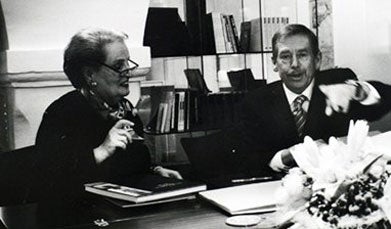 As most know, Havel helped lead the 1989 Velvet Revolution, bringing down the ruling Communist regime in Czechoslovakia. He became the first president of the Czech Republic after Czechoslovakia dissolved in 1993.

The Havel celebrations at Georgetown also included a video on Havel by Czech film director Petr Jančárek and a videotaped message from the Dalai Lama.

The dedication ceremony also included readings by students Charley Biddle (C’16) and Emma Clark (SFS’13) from Havel’s 1990 address to a joint session of the United States Congress and his book, “Disturbing the Peace,” and a musical dedication by singer-songwriter Suzanne Vega.