Since his time at Georgetown, Michael Benz (C’04) has gone from performing in Twelfth Night at the university to playing Hamlet at Folger Shakespeare Theatre with the prestigious Shakespeare’s Globe of London.

Since his time at Georgetown, Michael Benz (C’04) has gone from performing in Twelfth Night at the university to playing Hamlet at Folger Shakespeare Theatre with the prestigious Shakespeare’s Globe of London.

“With his white-blond hair, black clothes, and sulky comportment, he’s the emo Hamlet Ethan Hawke never quite managed to deliver,” Washingtonian magazine said about Benz, who performed at the Folger in September.

After touring as Hamlet with Shakespeare’s Globe of London in the U.K. this past summer, Benz is continuing to play the role in throughout the United States until the end of November.

“It was such a joy to work closely with Michael while he was at Georgetown – and to see him flourish since,” says Maya Roth, director of Theater & Performance Studies at Georgetown.

Roth, who directed Benz as Malvolio in Twelfth Night, and a few other faculty members took 20 students to see Benz’ Hamlet at the Folger a few days after Benz came to speak to some of them on Sept. 17.

“It is the greatest gift to have him share insights with students about his trajectory from Georgetown, his classical conservatory training for graduate school, navigating the early years as a professional classical actor, and now this prestigiousrise … performing with Ralph Fiennes, working with Trevor Nunn and carrying the lead in Hamlet on tour from England,” says Roth, also chair of the Georgetown’s Department of Performing Arts. “It’s rare for a young actor to really activate poetic language – its heightened language that’s not intentionally emotional.”

Roth notes that Benz, a psychology major with minors in theater and theology at Georgetown, won the department’s top award for critical and creative scholarship when he graduated. He went on to attend the Royal Academy of Dramatic Art after Georgetown.

The Georgetown alumnus’ accent wavers between British and American. He was born in England, but his parents, Thomas (F’70), and Peggy Benz, a palliative care nurse, are American. They moved to London more than 30 years ago. 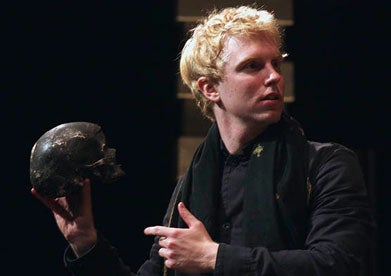 Michael Benz, playing Hamlet in the Shakespeare’s Globe of London production of the tragedy, says he was first drawn to acting after seeing the movie

Michael Benz, playing Hamlet in the Shakespeare’s Globe of London production of the tragedy, says he was first drawn to acting after seeing the movie Home Alone with his parents. Photo by Fiona Moorhead

Remarkably, the young actor already had plenty of experience by the time he got to Georgetown – starring in a British sitcom and playing the lead role in the BBC series Little Lord Fauntleroy.

It all started after his parents took him to see the movie Home Alone with Macaulay Culkin.

The young boy went straight to the yellow pages after seeing the movie and looked up “agents” close to where he lived in Hampstead.

“And then one day we were at school and these producers and casting people came to the American School in London,” he explains, “and said they were looking for a young boy, blonde preferably, to play this character Mike on this children’s sitcom.”

He and his five siblings all attended the K-12 school; four Benzes later attended Georgetown.

After five or six auditions, Benz won the part – playing Mike in Mike and Angelo for six years between 1993 and 1998.

“It was a really lovely, wholesome show,” Benz adds. “It was kind of a British Mork and Mindy.”

Benz plays a young boy named Cedric who lives in New York City with his mother and soon learns that he is the sole heir to an Earldom in the U.K.

One of Cedric’s New York friends is Mr. Hobbs, played by David Healy.

David Healy was the younger brother of former Georgetown President Timothy Healy, S.J., who served at the university between 1976 and 1989.

Off set, Benz recalls the younger Healy asking him what he wanted to do when he grew up.

“I said, ‘I don’t know, an actor?’ ” Benz says. “And he said, ‘well, you really ought to think about university.’ And I remember him saying, ‘you know, my brother runs a university in Washington, D.C.’ ”

Both men have since passed away.

“What was great about being part of a family of six kids is that you kept your head to the ground,” he says. “There was no opportunity for me to start thinking I’m bigger than my shoes. The nice thing about the U.K. is the fame doesn’t get to the level like those Saved by the Bell kids.”

Patrick (C’02), Kathleen (C’07), Kevin (C’09) all attended Georgetown while Thomas graduated from Lehigh and Christopher from Villanova in the late 1990s.

There was no opportunity for me to start thinking I’m bigger than my shoes. The nice thing about the U.K. is the fame doesn’t get to the level like those Saved by the Bell kids.”

Acting in a tragedy is nothing like actually experiencing one, Benz notes.

His only sister, who served as an executive assistant to the associate provost at Georgetown, was in a fatal car accident in Alaska in May of 2010.

Kathleen Benz was very involved in the university’s Office of Campus Ministry. She also attended church at Georgetown’s Dahlgren Chapel, where she was an Extraordinary Minister of the Eucharist.

“It’s an endless ongoing horror and pain for the family,” Michael Benz says. “She was in every sense to me the most selfless person I knew. She was perfect for Georgetown because of that.”

“I also genuinely believe that love doesn’t die, and that there’s a string that attaches us to those that we love forever,” he adds.

The siblings spent a lot of time together when he was a senior and Kathleen was a freshman.

“She was so homesick,” Benz says. “And I remember taking care of her that first year. I was just so proud of her when she graduated.”

The number of people who attended her funeral in Lancaster, Pa., and the memorial in Dahlgren Chapel impressed him. Rev. Kevin O’Brien, S.J., now vice president of mission and ministry at the university, led the Memorial Mass.

“It was so fantastic was the way that Georgetown rallied around the family…” Benz says, “…including President DeGioia, who sat with my parents and held my mother’s hand. You have no idea how much that means to us.”

As a freshman, Benz joined the Chamber Singers, the theater club known as Mask & Bauble and Nomadic Theatre.

“There’s nothing more bonding than doing a play together with a group of people,” Benz says. “We happened to do a play called The Marriage of Bette and Boo by a fantastic American playwright called Christopher Durang. “It was so exciting and so great and I met my best friends for life.”

Those friends include Catherine Norris (C’04), now a staff attorney at The Legal Aid Society in New York City; Kristine Johanson (SFS’04), an assistant professor of Renaissance literature and culture at the University of Amsterdam; Sorell (Richard) Negro (C’04), a land use and environmental law attorney in Hartford, Conn.; Nathan Kleinman (SFS’04), a political and human rights activist; and Michal Slaby (C’04) a multimedia artist based in Bielsko-Biala, Poland. 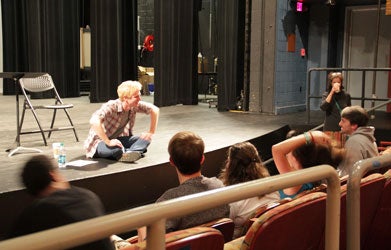 During his time at Georgetown, Michael Benz learned an important lesson about citizenship when he didn’t vote in the American 2000 presidential election. “Ever since I have voted in every single election that I could in Britain and in the U.S.,” he says.

The Shakespearian actor also says he learned a lesson about being a good citizen at Georgetown.

He had registered to vote in the American 2000 presidential election, but he didn’t end up voting.

“I felt separated from it in the way an 18-year-old might feel if they were in London in a general election,” Benz recalls. “I felt like I didn’t really know enough.”

Benz was sitting at his desk studying for a test in professor Steven Sabat’s psychology class test when he heard about the outcome of the race.

“People were screaming at the television,” he recalls. “They’re 18-year-olds and I was so impressed looking back on it now that they were so into it.”

The next day, before the exam, Sabat asked the class of 90 to raise their hands if they voted.

“And of course almost everyone raised their hands,” Benz recalled, “And then he said ‘raise your hand if you didn’t vote because you couldn’t vote,’ and something like 11 or 12 international students, or who weren’t 18 raised their hands.”

Then the professor asked the class to raise their hands if they could have voted but you didn’t.

“I started to raise my hand and I looked around and there was only one other guy,” the actor said. “My hand was up and went right down. And he said, ‘No, no, no, raise it’ and then he went on for about 10 minutes, about how we have a right to vote, you exercise that right, people have died for that right.”

“Ever since I have voted in every single election that I could in Britain and in the U.S.”