Former U.S. Attorney General Eric Holder talks about race and challenging the status quo in a conversation with Michel Martin of NPR’s All Things Considered.

Former U.S. Attorney General Eric Holder told an audience of Georgetown students that “change is noisy” and to be unafraid of challenging the status quo as he reflected on his legal career during a conversation with NPR’s Michel Martin today.

Holder said America is at it’s best when it makes noise to make change, whether it’s challenging slavery or the lack of women’s rights to vote, equal rights for people of color and gay and lesbian people

“That’s kind of the way you have to do it. This is a noisy country. It’s what’s great about this country,” he said. “When we are complacent, when we are accepting of the status quo, we don’t make progress in equality, in equities, I think.” 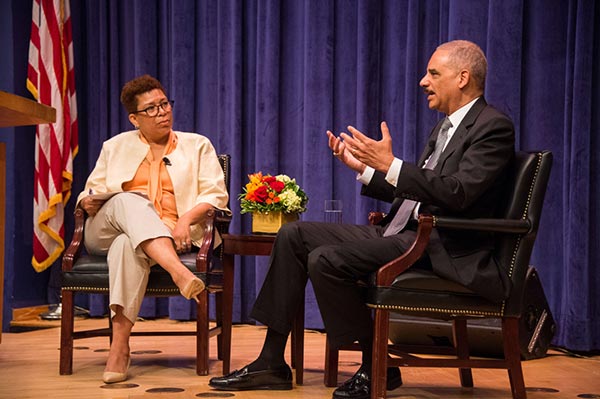 Holder, the nation’s first African American U.S. Attorney General, sat down with Martin, the weekend host of NPR’s All Things Considered, as part a Georgetown series of conversations on race in America in partnership with Martin.

“We created this series as a way for our community to more deeply engage the issues that we are defining this moment – the place of race in this American story and the undeniable urgency of addressing the enduring and persistent legacy of racism and discrimination,” said Georgetown President John J. DeGioia.

Holder served in his cabinet post from February 2009 to April 2015, the third longest term for a U.S. Attorney General.

While Attorney General he launched a Justice Department inquiry into the August 2014 shooting death of unarmed teen Michael Brown by a police officer in Ferguson, Missouri. The review uncovered flaws in overall policing practices in the small Midwest town that included rampant constitutional violations against the city’s largely black population.

Holder said the Black Lives Matter movement is making the kind of noise to effect change.

“Society has got to deal with racism [and] implicit bias,” he said. “The criminal justice system is just a part of, and a result of, the way in which our society is still constructed – where race is still too predominate an issue, too negative an issue when it comes to how people are assessed.”

He talked about the racial implications of having different prison sentences for crimes involving crack versus powder cocaine as well as the use of military equipment by police against citizens in small towns.

Holder said the conversations about race are important to make progress in this country. Shortly after being appointed to his cabinet position, he delivered an address, now infamously referred to as the “Nation of Cowards” speech. In the speech he talked about America’s fear to approach the subject of race.

Holder is now a partner at Covington & Burling law firm. Though he has left the Justice Department, he says he hasn’t left the fight for justice and urged the audience of students to continue moving the needle forward.

“I think we’re in a better place than we were when I gave that [speech],” he said. “I think our country does talk more about race now than we did then. I think it’s been foisted upon the nation by the fact that we have an African American president and had and still have black attorneys general.”