Robert Mueller, who served as FBI director for 12 years, will provide insights on his public service career to faculty, students and leaders as Georgetown’s first Distinguished Executive-in-Residence. 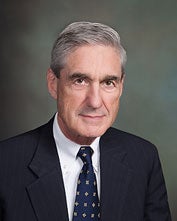 Robert Mueller, who stepped down as FBI director on Sept. 4 after 12 years of service, has been appointed the university’s first Distinguished Executive-in-Residence.

“There are four areas that I’m interested in – national security, cyber security, organizations in transition and leadership,” says Director Mueller, who took office seven days before the 9/11 attacks in 2001. “I’ve been very fortunate to have experience in these areas and I’m looking forward to having the opportunity to discuss these issues with students and faculty.”

As distinguished executive-in-residence at Georgetown, he will provide faculty, students and university leaders with insights and perspectives based on his lengthy career in public service.

Mueller, who will return to practicing law, says he looks forward to being associated with a university with “Jesuit values, dignity and integrity.”

Born in New York City, Director Mueller joined the United States Marine Corps after graduating from Princeton University. He served as an officer for three years and led a rifle platoon in Vietnam. After military service, for which he earned both the Bronze Star and the Purple Heart, he completed a law degree from the University of Virginia.

“Robert Mueller brings to Georgetown an extraordinary depth of insight related to issues of national and cyber security and of public service at the highest levels,” says Georgetown President John J. DeGioia.“Throughout his distinguished career, he has demonstrated great integrity, character and leadership, and it is a privilege to welcome him to Georgetown.”

The Washington, D.C., resident says he has friends and relatives who went to Georgetown, and that with his wife, Ann, and two daughters, has attended many of the university’s athletic and other events.

“I think it will be tremendously invigorating to spend time with students and faculty who are on the cutting edge of new ideas, new initiatives with a global orientation,” he says.