Former Secretary of State Hillary Rodham Clinton speaks about the power of women’s economic participation during the relaunch of the International Council on Women’s Business Leadership at Georgetown.

OCTOBER 30, 2014THE ECONOMIES OF THEUnited States and those abroad would recover much faster if more women participated in the workforce and got equal pay for equal work, former Secretary of State Hillary Rodham Clinton said at Georgetown today.

“If we closed the gap in workforce participation between women and men around the world, GDP would grow by nearly 12 percent by 2030,” Clinton said. “…“It’s very clear that the more women we can get to participate fully and get paid equal pay for equal work the faster our economy will recover and economies across the world likewise.”

The event was part of the institute’s relaunch of the International Council on Women’s Business Leadership (ICWBL) at Georgetown.

The council will regularly convene to explore the challenges facing women in business, investigate and inform on such issues as well as celebrate leaders in the field.

The former secretary of state told a packed audience in Georgetown’s Gaston Hall today that while she was traveling as First Lady in Africa she saw women working everywhere, in fields, market stalls and many other areas.

But when she asked how economists evaluated contributions that women make to the economy there she was taken aback.

“I’ll never forgot one reply – ‘we don’t because they don’t participate in the economy,’ ” Clinton recalled. “… The work that sustained families, that created opportunities for these women to gather some income in the markets, or to produce enough food to feed their family with maybe a little left over, was just not counted.”

It was after that experience, she said, that she began to think about what would happen if women stopped working in the informal economy, and realized that the formal economy would come to a stop.

She encouraged students to think about how such contributions are calculated.

“This issue about how we create jobs in the global economy today, for men and for women, how we really help prepare young people for the jobs that are going to be available through education and training,” she said, “this is going to be one of the most significant questions for public policy and for private sector decision makers, as those of you who are students here graduate and go out into the world to work.” 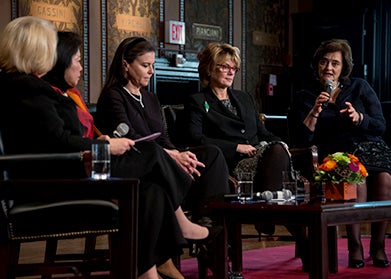 At far left, Melanne Verveer, executive director of the Georgetown Institute for Women, Peace and Security, listens to Cherie Blair, founder of the Cherie Blair Foundation in the United Kingdom, during a panel discussion that included Anne Finucane, global chief strategy and marketing officer for Bank of America; Mari Pangestu, former minister of trade for Indonesia; and Ofra Strauss, chair of the management board of the Strauss Group in Israel.

Clinton also spoke about the loss of her friend, former School of Foreign Service (SFS) Dean Carol Lancaster, who passed away earlier this month.

“[Lancaster] was instrumental in the creation of the first-ever, anywhere in the world Georgetown Institute for Women, Peace and Security,” the former secretary of state said. “So for me this is yet another wonderful opportunity to talk about the work that Georgetown is doing in partnership with so many others, and the model that Georgetown is providing through the institute which is on the brink of being replicated in other places around the world who recognize the significance of taking the subject of women, peace and security and integrate that within a world-class academic institution like Georgetown.”

Panelists included Cherie Blair, founder of the Cherie Blair Foundation in the United Kingdom and wife of former Prime Minister Tony Blair; Anne Finucane, global chief strategy and marketing officer for Bank of America; Mari Pangestu, former minister of trade for Indonesia; and Ofra Strauss, chair of the management board of the Strauss Group in Israel.

“We are greatly honored to house the International Council on Women’s Business Leadership – and believe deeply in its promise and the impact it can make throughout the world,” Georgetown President John J. DeGioia said in his remarks introducing Clinton.

He said the issues the council will focus on “deeply resonant with the mission of this university.”

“The economic empowerment of women – the promotion of gender equality, equal access to capital and market and the building of capacity and skills ­– all reflect our tradition of social justice, our commitment to equal opportunity and our dedication to the common good,” he explained.

Then-Secretary of State Hillary Clinton and Georgetown President John J. DeGioia announced the creation ofGIWPSin 2011 at the unveiling of the U.S. National Action Plan on Women, Peace and Security.

Housed in Georgetown’s School of Foreign Service, GIWPS examines and highlights the roles and experiences of women in peace and security efforts worldwide through cutting edge research and scholarship, timely global convenings and strategic partnerships.