The Initiative on Catholic Social Thought and Public Life’s first event included remarks by Cardinal Donald Wuerl, Archbishop of Washington, and a panel discussion on Pope Francis with PBS NewsHour political analysts Mark Shields and David Brooks and other participants.

The initiative is being led by John Carr, who previously served for more than 25 years in leadership positions with the U.S. Conference of Catholic Bishops and is the Washington correspondent for America Magazine.

“The initiative will bring together evangelical, Catholic and secular leaders to address the silence and stalemate on U.S. poverty,” Carr said at the event, “demonstrating that Catholic social thought can bring leaders together across ideological, political and religious lines to address issues with moral and human respect.” 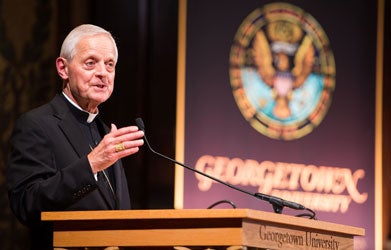 “I think [Pope Francis] is the model for the civility and service that a polarized and paralyzed Washington could learn from and follow,” said Cardinal Donald Wuerl, Archbishop of Washington, during the Inititiave on Catholic Social Thought and Public Life inaugural event.

“The vibrancy of the Catholic social mission lives in community, in dialogue and in service, and we’re deeply grateful to have this opportunity to come together in community today,” DeGioia said. “The spirit of this work – the pursuit of justice, equality and peace – has a deep resonance within our community here at Georgetown and in the city, and in the lives of our alumni and partners around the world.”

Wuerl noted that he was in Rome when the new pope was elected.

“By what he does and by how he does it, by what he says and how he says it, Pope Francis is offering a whole new moment of grace, of outreach and renewal,” Wuerl said. “I think [Pope Francis] is the model for the civility and service that a polarized and paralyzed Washington could learn from and follow.”

He also said he thought Carr and the new initiative will “provide an affirmative, consistent and faithful voice, articulating the navigation of the gospel to the issues of our day here in the nation’s capital.”

Daniels said that the new pope is “calling Catholics to move past the tired liberal-conservative divide that has too often pitted us against each other,” that has “too often stopped us from working together for the common good.”

“I think the messages Pope Francis is calling us to work for are to be for the poor, of the poor … to be with the voices of the vulnerable wherever we find them,” she said. 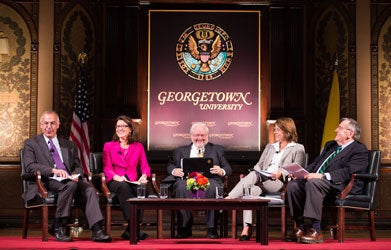 Brooks, who is Jewish, said that Pope Francis is “introducing a spiritual counterculture that transcends the Catholic Church and transcends out to Christianity and also to Judaism and the world at large.”

His PBS colleague said what struck him most about the new pope was that the new pontiff asked people to think about the common good.

Wuerl said the pope’s call for a pursuit of greater justice is evident in his words and actions since he was elected this past March.

“What we have come to know and love in these rapidly passing six months is not a new gospel – it’s the same heritage passed on for 20 centuries,” he said. “But what we are seeing and hearing is a new way of doing the gospel.”

The Initiative on Catholic Social Thought and Public Life includes both educational and outreach activities, designed to:

Promote knowledge and dialogue about Catholic Social Teaching as it relates to pressing economic, social and political issues in the United States and the world.
Prepare students, community leaders and public officials for affirmative engagement in public life and advance a principled and consistent vision of Catholic lay leadership in politics and society.
Engage religious leaders and public officials outside the Catholic tradition in efforts to promote civil dialogue and collaboration for the common good.