As a fellow in Georgetown’s Lannan Center for Poetics and Social Practice, award-winning author Dinaw Mengestu (C’00) began strengthening the chords of his writer’s voice. This year, he returns to campus to teach students about his craft. 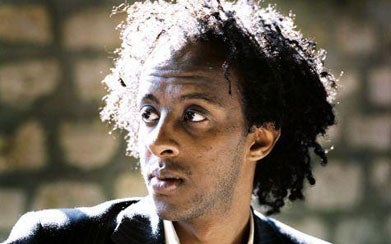 Award-winning author Dinaw Mengestu (C’00) will launch this year’s Lannan Reading and Talk Series Sept. 25 with a reading from one of his new works.

The alumnus, who begins his one-year term as the Lannan Chair of Poetics this fall, says it’s a good feeling to come full circle in a program that essentially set the foundation for his writing.

“Having the honor of coming back as the chair, more than anything, confirms the value of the program,” he says. “It was during my time as a Lannan fellow that I most profoundly felt that I had found a community of students who didn’t all necessarily want to be writers, but who were just as serious and engaged with literature as I was.”

The Lannan Center for Poetics and Social Practice is part of Georgetown’s English department and exposes students to working writers and through readings, seminars, a literary symposium and other events.

It also looks at how the arts, in keeping with the university’s Jesuit tradition of social justice, may help create a “more just social order.”

He received acclaim for his first novel, The Beautiful Things That Heaven Bears (Riverhead, 2007), which won the 2007 Guardian First Book Award and was lauded by The New York Times and The New Yorker. His second book, How to Read the Air (Riverhead, 2010), landed him on The New Yorker’s list of 20 Under 40 writers for 2010.

His first book detailed the challenges of Ethiopian immigrants living in Washington, D.C.

While on campus, Mengestu will teach one course per semester – The Writer’s Perspective this fall and another course to be determined in the spring.

“The Writer’s Perspective [course] is a hybrid of a literary seminar and creative writing workshop where the students are engaged in poetry, photography and novels,” he says.

“We’re thrilled to have him [here],” says Henry Schwartz, professor of English at Georgetown. “As a bonafide phenom under 40, it gives us an injection of energy and continues our stellar reputation for attracting some of the most interesting writers out there today.”

Past Lannan poetics chairs include Fanny Howe, who completed her residency earlier this year; Derek Walcott, who received the 1992 Nobel Prize in Literature; and Carolyn Forché, who is on sabbatical but will return as director of the Lannan Center next year.

“We have an illustrious tradition for filling this chair,” says Schwartz, interim director for the Lannan Center.

Though Mengestu lives in Paris with his wife and children, he often visits Georgetown when he comes home to visit family still living in the area. This also isn’t the first time he’s taught students on campus.

Just as his debut novel was released in 2007, Mengestu taught as a writer-in-residence at Georgetown. He’s also come back to campus to visit the professors who inspired him and to deliver readings as well.

His third novel, All Our Names, is set in the late 1960s and early 1970s in an unnamed African country at the moment optimism from independence begins to fade into violence and the birth of totalitarian governments, he says.

“The second part of the book takes place in the U.S., at the same time, where an American woman and a young African man … [experience] optimism about people being able to love who they want to love,” Mengestu explains. “[It’s] kind of a capstone to the first two [novels],” he says.

He plans to read excerpts from the unfinished novel, on Sept. 25, to launch this year’s Lannan Reading and Talk Series.

Schwartz says he’s pleased to have the Georgetown alumnus start off the series.

“[He] certainly puts a shine on Georgetown’s reputation,” says Schwartz.