An Irish-American Georgetown alumnus and NBC executive will lead the largest parade in the world through Manhattan on Saturday as the grand marshal of the New York City St. Patrick’s Day Parade. 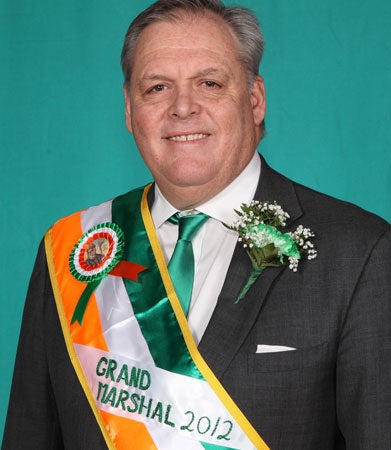 Francis X. Comerford (B’77), chief revenue officer and president of commercial operations for the NBC-owned and -operated television stations, has marched in the parade for more than 40 years, since he was a student at New York City’s Xavier High School.

“We are delighted Frank has been selected as the 2012 Grand Marshal,” says John Dunleavy, chair of the parade. “He is an outstanding Irish-American who has devoted a huge amount of his energy and charisma contributing to the legacy of the Irish in this great country.”

This year, Comerford will dance a jig up Fifth Avenue for 2 million live spectators, 4.5 million home viewers and an online audience from around the world.

“I was flabbergasted when the parade committee asked me to be the grand marshal,” says Comerford, whose great-great-grandfather came from Ireland to America in 1848 to work as a coal miner. “I’m so proud to be able to celebrate St. Patrick’s Day like this, with thousands of other Irishmen.”

Georgetown pride will be well-represented during the parade. Four of Comerford’s siblings and several extended family members also went to Georgetown. Many of them will be marching Saturday with Comerford, his wife, Maura, and their 3-year-old son.

Comerford’s duties began Thursday, when he rang the closing bell at the New York Stock Exchange. On Saturday, he’ll join other Irish-Americans for Mass at St. Patrick’s Cathedral before leading the parade.

An annual tradition since 1762, the parade is only a little older than Georgetown, which was founded in 1789.

According to the St. Patrick’s Day Parade Committee, the tradition began with an unofficial group of homesick Irish expatriates who got together to play Irish music, speak their native language and wear green, a color forbidden in clothing by Ireland at the time.

Comerford will be sporting the green, white and orange of his ancestors’ homeland.

“For such a small country floating in the middle of the Atlantic, the Irish have had a huge influence on the world,” he says. “I inherited certain Irish traits, and I see them in my family members, too. The Irish value hard work and loyalty, and they continue on in the face of the toughest situations.”

This year’s parade is dedicated to America’s veterans. As the son and son-in-law of men who left high school to fight in World War II, Comerford says he feels especially privileged to lead the parade in their honor.

“The things that generation did were remarkable, and now we have a whole new generation of veterans to thank,” he says. “If it weren’t for the sacrifices they’d made, the United States would be a very different place.”