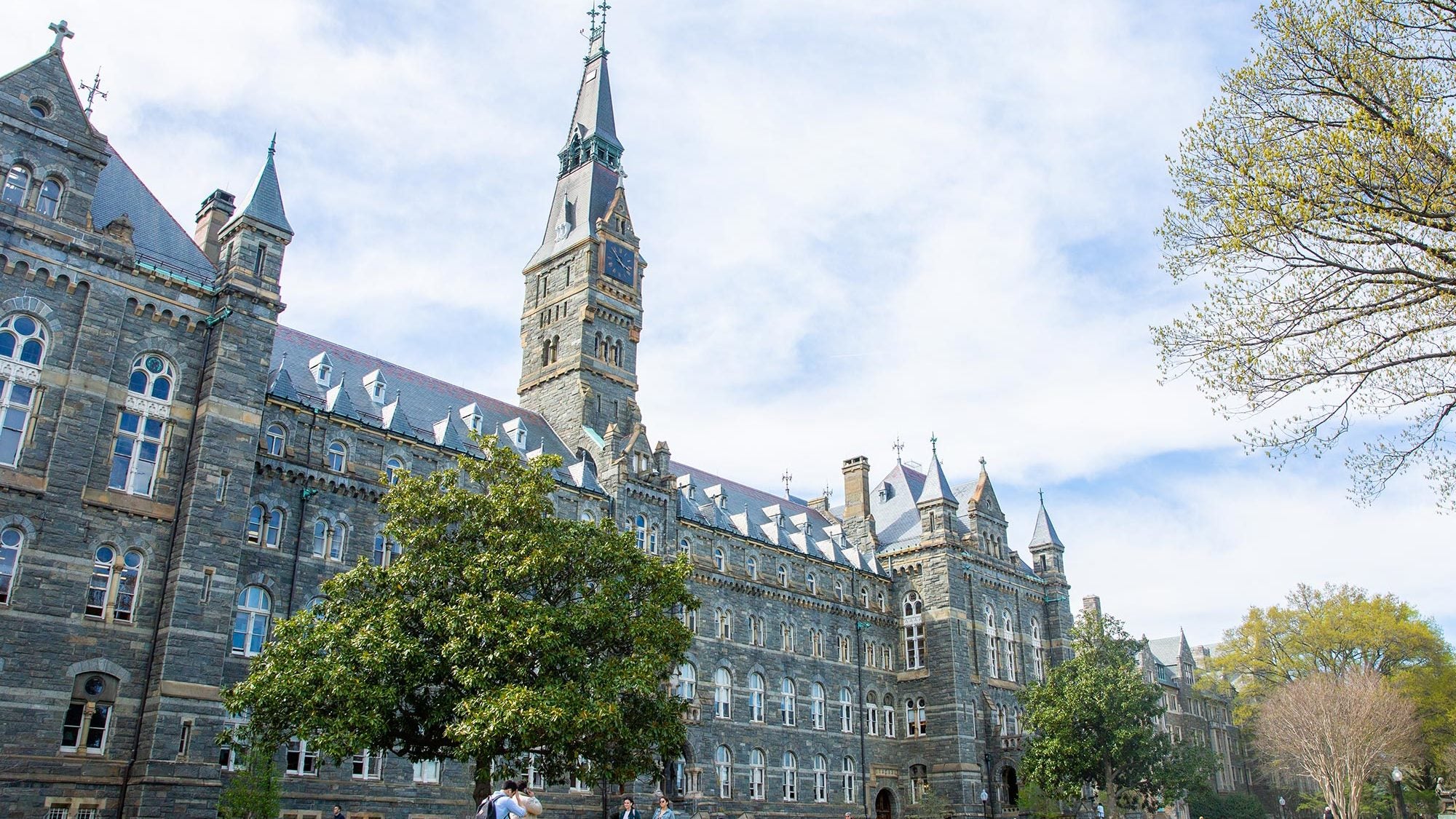 Sarem Haq (SFS’21), an intelligence officer at the Department of Defense working to advance justice and diminish the threat of nuclear war, has won the 2022 Rhodes Scholarship — the oldest and most competitive international scholarship.

Haq, who graduated at the top of his class from SFS in 2021, is the 28th student from Georgetown to receive a Rhodes Scholarship. He joins the ranks of other Georgetown alumni including the most recent recipient, Khansa Maria (SFS’21), and former President Bill Clinton (SFS’68).

The scholarship selects promising young people from around the world who demonstrate integrity, leadership, character, intellect and a commitment to service to study at the University of Oxford. Haq will study international relations, focusing on arms control and strategic global stability, with his two-year scholarship.

“I’m excited to learn from others who seek justice, understand their views on humanity’s needs and refine my own beliefs in the process,” Haq says. “After all, pursuing justice isn’t about toiling to address humanity’s needs from a grand historical perspective, it’s also about caring for and understanding the people right next to you.”

Haq has been focused on justice, international security and nuclear arms control throughout his post-college experience and undergraduate career — first at American University, then at Georgetown — though these issues first piqued his interest at age 10.

From the Podium to the Pentagon

The son of Pakistani immigrants, Haq spent summers in Lahore visiting his grandparents, who experience electricity blackouts multiple times a day. He remembers a particularly formative moment at age 10 when he and his family toured a Pakistani Navy vessel to escape the heat of staying indoors. The officer on deck told him they had a special “bunduq” (gun) that could bring about “qayamat” (armageddon), Haq says.

“I was perplexed by this. Pakistani’s army could start the end of the world, but my Pakistani grandmother couldn’t start the gas stove in her kitchen,” he says. “I wondered what could drive such destitute nations to invest so heavily in destructive power.”

He continued to explore these international security questions on his high school debate and speech team in Los Angeles, California.

His senior year, he ranked as a national finalist in congressional debate at the 2017 National Speech and Debate Tournament, and, despite moving across the country to American University for college, he continued to coach high school competitors during his undergraduate studies, which he believes was integral to his academic success.

“My experience competing in, and coaching, debate over the past nine years has taught me that organized argumentation is perhaps the best way to learn about issues while developing an understanding of the perspectives of others,” Haq says.

At American University, Haq became involved in local politics. He volunteered as a field intern for Let America Vote, which involved phone banking and canvassing homes in Northern Virginia in support of voter registration efforts. In the summer of 2018, Haq worked as a legislative intern at the Los Angeles City Hall, focusing on public safety and transportation policy.

In 2019, Haq transferred to Georgetown, where he was eager to join foreign policy discourse on campus. And, he says, he became increasingly interested in the global nuclear landscape.

He served as a head editor for the Conflict and Security section of the Georgetown Journal of International Affairs and rekindled his love for debate by joining Georgetown’s Parliamentary Debate Team.

He was one of two undergraduates to work as an assistant editor at the Georgetown Journal of Asian Affairs, a publication traditionally limited to graduate students.

And as a research assistant at Georgetown, Haq translated literature in Urdu published by a Pakistani terrorist group, including analyzing the documents and offering analysis on reinsurgency recruitment practices.

“What makes Mr. Haq stand out from his peers is a steadfast commitment to addressing a simple yet profound question in international affairs: how to make a more secure world, one in which military aggression and existential threats among states are lessened?” says Assistant Professor Diana Kim, who advised Haq’s senior thesis. “I believe he has extraordinary promise to become a leading scholar in security studies and international relations, capable of making theoretical innovations that bridge into real world policy change.”

“Pursuing justice isn’t about toiling to address humanity’s needs from a grand historical perspective, it’s also about caring for and understanding the people right next to you.”

Throughout his studies, and with developments in nuclear arms control, Haq said he recognized the urgency and need to ensure future conflicts weren’t fought with nuclear weapons. And he recognized public service as the avenue to do so.

“My faith in justice and desire to contain [forces threatening it] is why I rejected lucrative private sector opportunities in favor of public services,” he says. “It’s why I’m drawn to the Rhodes mission of ‘fighting the world’s fight.’”

Haq had previously worked as a summer intelligence officer in the summers of 2019 and 2020, where he conducted highly classified intelligence collection operations and later, supported U.S. Special Operations Command activities as a Russia analyst.

After graduation, he joined the Department of Defense as an intelligence analyst, a role that has allowed him to provide analysis for senior officials at the White House and Pentagon and help guide policy decisions to prevent escalation — and confront the increasingly real possibility of nuclear conflict, he says.

Haq served as a Russia analyst before and during the war in Ukraine, and in July, pivoted to be an analyst on China. Throughout his work, he has contributed to a National Intelligence Assessment and articles for the U.S. president’s daily brief, and has personally authored intelligence assessments for the Secretary of Defense.

After Rhodes, Haq plans to attend law school, and then return to public service as a policymaker informed by his years of real-world experience and academic study.

“I believe justice is at a critical juncture,” he says. “We could be one of the first generations of the human story, or one of the last. I hope to help us be the former by minimizing risks and bending the moral arc of the universe, if only gradually, toward justice.”