More than 500 alumni, students and faculty gather for the first university-wide Women’s Forum, where participants share their experience and expertise in leadership, entrepreneurship, law, social justice and the sciences.

– More than 500 alumni, students and faculty gathered last week for the first university-wide Women’s Forum, where participants shared their experience and expertise in leadership, entrepreneurship, law, social justice and the sciences.

Executives such as Ann Sarnoff (B’83), president, BBC Studios, Americas, and Margaret Huang (SFS’91), executive director of Amnesty International, were among those sharing insights during the two-day forum.

“Right now, we’re in this #MeToo moment when so much consciousness is happening,” Sarnoff said, “but it takes a while for the pipeline to change.” 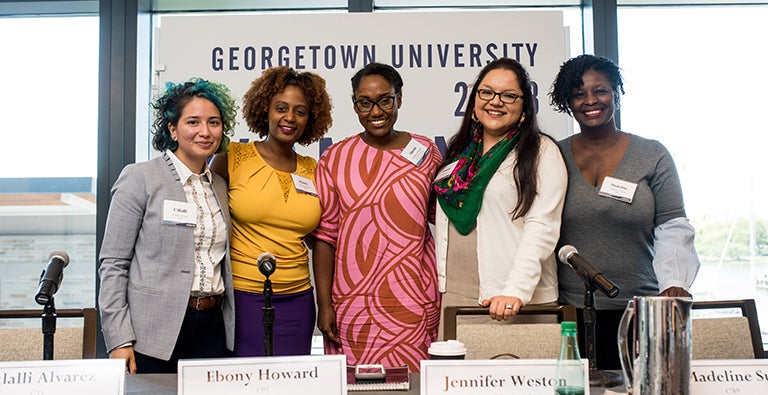 Sarnoff said mentorship among women in the workplace and young women developing an understanding of the power they possess are key to changing behaviors toward gender equity.

“It’s every step at a time speaking up, finding a voice and stopping the conventional behavior that we have so ingrained in us from society,” she added.

For Jessica Andino (C’18) of Rockville, Maryland, the forum served as an opportunity to gain career advice and a means to be empowered.

“My favorite panel of the conference was the Hoyas in Racial Justice event because it definitely embodies the Jesuit value of people for others,” said Andino, a government and sociology major. “I attended this conference as a student, but I can’t wait for next year’s conference as a alumna.” 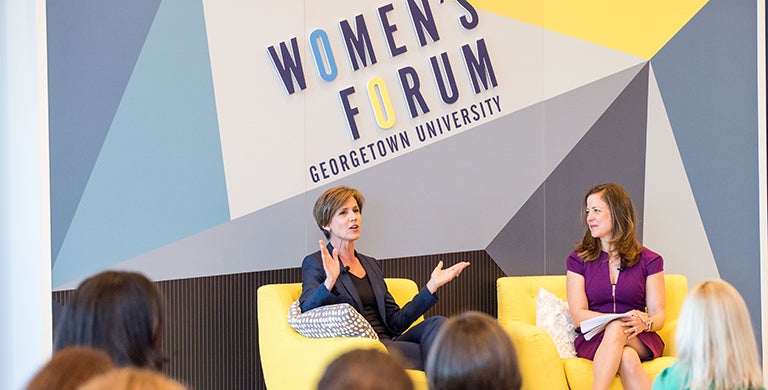 Sally Yates talks about her 27-year career at the U.S. Justice Department with Miriam Vogel (L’01).

“I’ve spent a lot of time over the last year doing a lot of public speaking, and I’ve got to tell you, it’s not often that you get to speak to a room full of accomplished women like this,” said Yates, who rose through the ranks during a 27-year career at the U.S. Department of Justice.

Yates, a distinguished lecturer from government for the 2017-2018 academic year at Georgetown Law, is best known for her refusal to defend the White House’s travel ban and getting fired for it.

Huang talked about her advocacy for human rights and racial justice during one of the panel discussions.

No Reason For Despair

Despite research showing that businesses are more profitable when women are in top executive positions, she said women are still not equally represented.

Women represent only 4 percent of CEOs globally and only 11 percent of CFO roles, according to a Pew Research study.

But Huang said the statistics were no reason to despair.

“As long as you are true to what you believe in, you’ll come out just great,” she said. 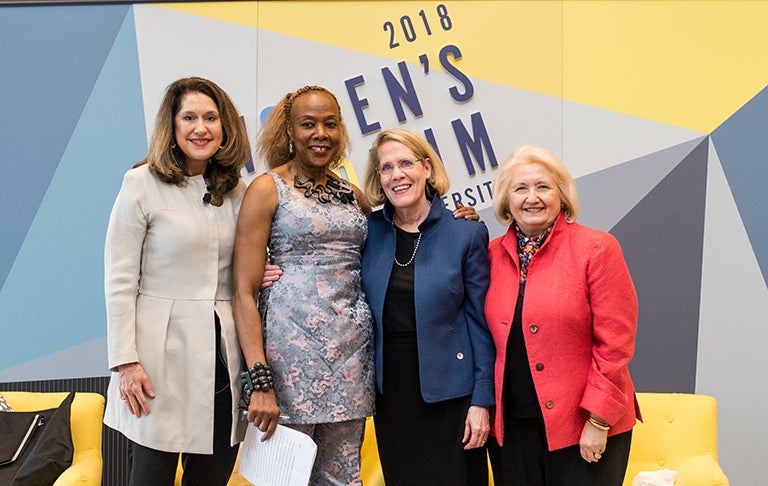 Judith Areen (second from right) poses after her panel discussion with (from left) Jane Aiken, Rosemary Kilkenny (L’87) and Melanne Verveer (I’66, G’69).

The first university-wide Women’s Forum at Georgetown has its roots in a gathering of Georgetown Law alumnae that began 25 years when Judith Areen served as dean of the Law Center.

“We thought, ‘let’s bring back women, alumnae, who are in the midst of [their careers] and talk about some of the obstacles that they face in finding a career path within their organization and making partner in their law firm and in building a practice outside a large law firm,’ ” she said.

“[Today], we’ve gone beyond the law school. What a terrific opportunity.”

Georgetown continues to carry out its commitment to gender equity through a number of initiatives and academic programs – many of which were involved in the Women’s Forum.

The university addresses gender issues through the Women’s and Gender Studies Program, the Georgetown Institute for Women, Peace and Security, the Gender+ Justice Initiative, the Women’s Center, the Georgetown Women’s Alliance and enhanced work on Title IX and sexual assault issues.

Georgetown also is one of 10 universities across the globe recognized by the United Nations as a HeforShe impact champion for gender equity.

Many of the forum’s speakers talked about the support they gained through members of the Georgetown and its resources that stretched beyond gender specific programs and initiatives.

Tiffany Yu (B’10), founder of Diversability, said she was able to start her own entrepreneurial endeavor because of a grant that was offered on campus.

“I applied for a ReImagine Georgetown Grant. The money didn’t matter that much,” she said. “What mattered more was someone who believed in this idea more than me. There is so much power in emotionally sharing.”