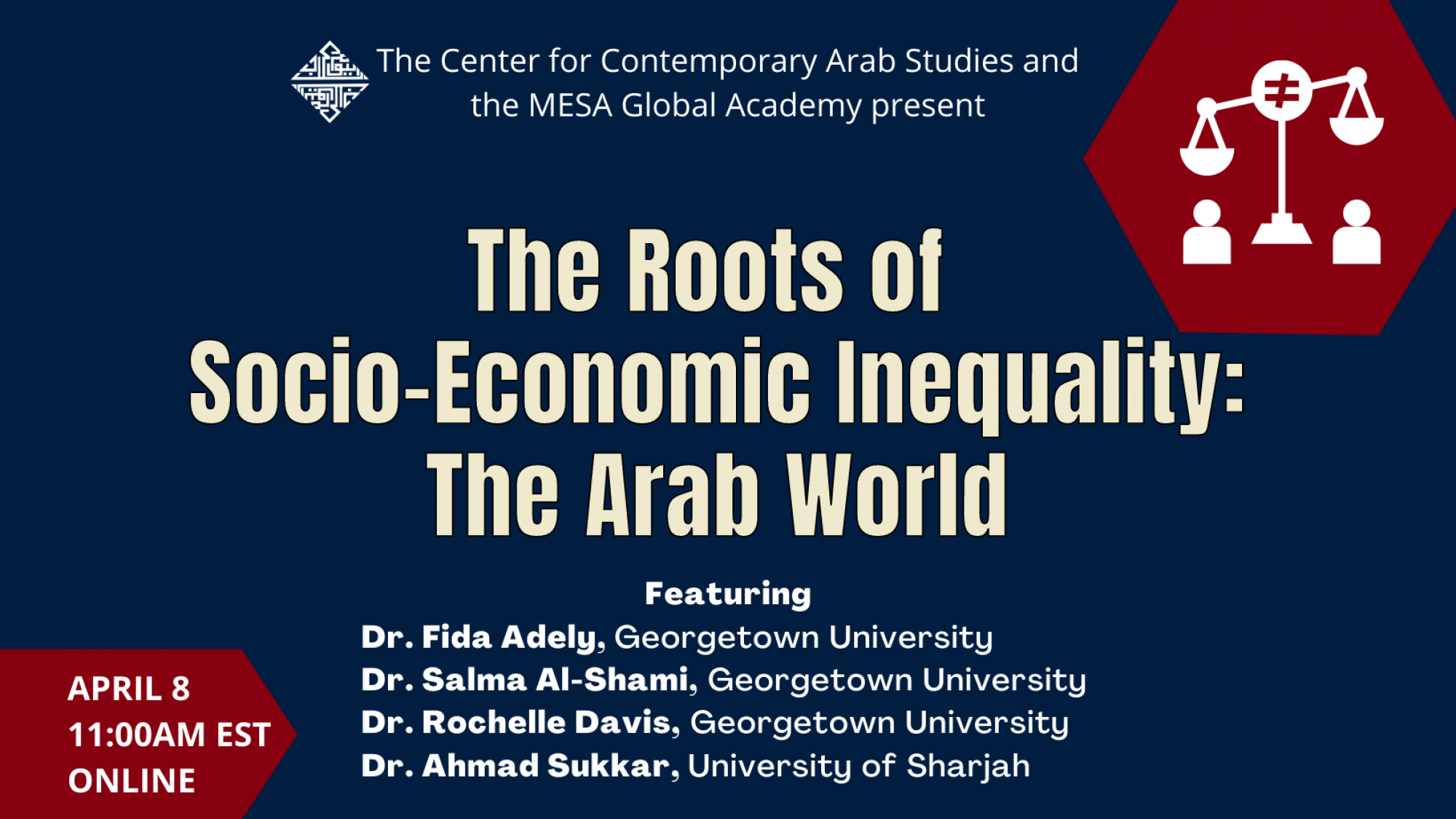 The Roots of Socio-Economic Inequality: The Arab World

Fida Adely is an Associate Professor at the Center for Contemporary Arab Studies in the School of Foreign Service at Georgetown University and the Clovis and Hala Salaam Maksoud Chair in Arab Studies. She is also currently serving as the Academic Director for the Arab Studies program at Georgetown. Dr. Adely is an anthropologist and her research interests include education, labor, development, and gender in the Arab world. Her primary research site has been Jordan, although she teaches and writes about the Arab world more broadly. Dr. Adely received her PhD in 2007 at Teachers College (Columbia University) in Comparative Education and Anthropology. She is the author of Gendered Paradoxes: Educating Jordanian Women in Nation, Faith, and Progress (University of Chicago, 2012). Her most recent publication (co-authored with Ankushi Mitra, Menatalla Mohamed, and Adam Shaham) is “Poor education, Unemployment and the Promise of Skills: The Hegemony of the ‘Skills Mismatch’ Discourse” for the International Journal of Education Development (2021).

Salma Al-Shami is an Adjunct Professor in the Global Human Development program at Georgetown University. She also joined Princeton’s Arab Barometer as a Senior Research Associate in September 2019. In collaboration with the director, Dr. Al-Shami is responsible for the questionnaire design, data processing and management, statistical analyses, and dissemination of study findings. Additionally, Salma worked as methodologist at Georgetown University and the International Organization for Migration’s joint panel study on Iraqi IDPs’ access to durable solutions to their displacement with Prof. Rochelle Davis. A Middle East area expert, she has more than seven years’ experience designing and conducting mixed-method research projects in countries throughout the region including Syria, Turkey, Lebanon, Jordan, Iraq, and Libya. She received her PhD in Political Science at Northwestern University.

Rochelle Davis is an Associate Professor of Anthropology and the Sultan of Oman Chair at the Center for Contemporary Arab Studies. Her research is on refugees, war, and conflict, particularly Syrian and Iraqi refugees and internally displaced persons. Since 2010, her research projects have included training refugees and local community members to develop questions and conduct interviews. To date, these projects have amassed over 300 in-depth interviews with refugees and migrants in the region. She is also a Senior Researcher on Georgetown’s Institute for the Study of International Migration (ISIM) and the International Organization for Migration grant conducting a multi-year survey of 4000s Iraqi households displaced since 2014 by ISIS/ISIL/Da’esh. Her first book, Palestinian Village Histories: Geographies of the Displaced, (Stanford University Press, 2012) was co-winner of the Middle East Studies Association’s Albert Hourani Book Award recognizing outstanding publications in Middle East studies. Prof. Davis is currently writing a book on the role of culture in the U.S. military wars in Iraq and Afghanistan, based on research she has conducted since 2006. Her analysis explicates the conundrums of being being tasked to be culturally sensitive in a military occupation, and the personal and collective experiences of war.

Ahmad Sukkar is a British Syrian academic and architect, currently an Assistant Professor in Architectural Humanities, Heritage and Design at the University of Sharjah, and a Middle East Studies Association of North America (MESA) Global Academy Scholar. He completed a PhD at the University of London with a thesis shortlisted for the De Gruyter Prize for the Study of Islam and the Muslim World, British Association for Islamic Studies. He had postdoctoral fellowships at MIT (Aga Khan Fellow), Oxford (Imam Bukhari Fellow), the American University of Beirut (Mellon Fellow), and the Orient-Institut Beirut, and a lectureship at Cambridge. His recent publications include a co-authored article with Hany Fakhani and Sawsan Abou Zainedin, entitled “Syrian (In)formal Displacement in Lebanon: Displacement as Urbanism, Informality as Architecture,” published by the Asfari Institute, American University of Beirut. He was shortlisted for the Tamayouz’s Mohamed Makiya Prize—Middle Eastern Architectural Personality of the Year 2020.

The Center for Contemporary Arab Studies public events program is made possible thanks to funding from a Title VI grant from the U.S. Department of Education for CCAS as a National Resource Center on the Middle East and North Africa. Please email CCAS Events Coordinator, Maddie Fisher (maddie.fisher@georgetown.edu) with questions or requests for a medical accomodation. Accomodation requests made after March 31 will be addressed with a good faith effort. Zoom’s automatic live transcription service will be offered . The event will be recorded. By joining the event you consent to Georgetown University and/or MESA using any images or footage captured of you during this event in our social media and publications.