Rebuilding Latin America From the Inside 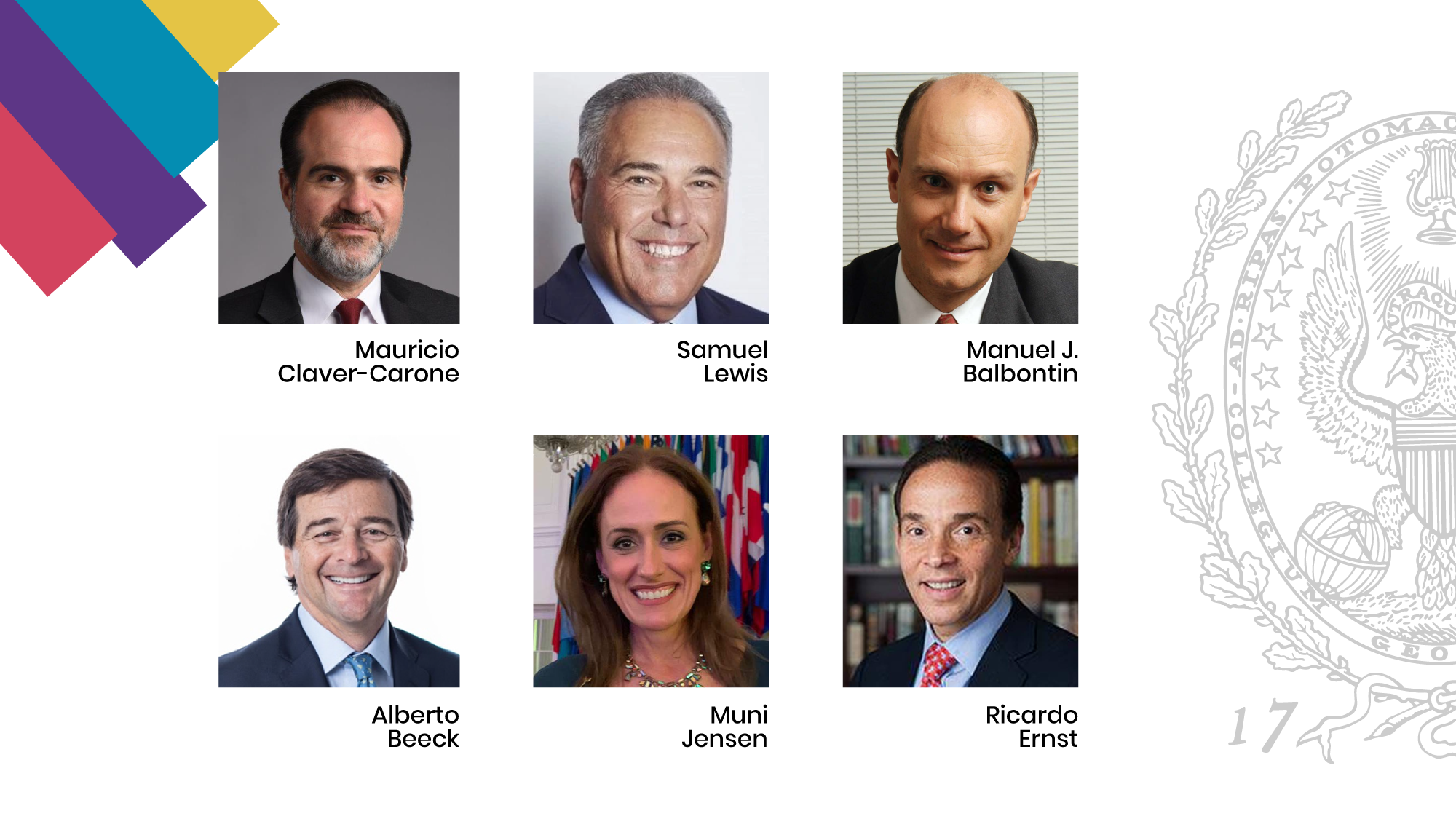 The COVID-19 crisis has affected the world in unprecedented ways for more than one year, stretching thin the resources of both the public and private sectors and exposing the long-standing tensions and growing edges of political and economic models. Latin America, in particular, has seen much of its hard-earned recent growth and democratization called into question and the countries in the region have responded with widely differing policy measures.

Our first webinar for 2021 will be focused on how to tackle “Rebuilding Latin America from the Inside.” Our keynote speaker, Mr. Mauricio Claver-Carone, President of the Inter-American Development Bank (IADB) will join Georgetown University Latin American Board former Chairmen and current Chairman to discuss the role of multilateral organizations in supporting the competitiveness of the region as we move forward and recover from this crisis. Journalist Muni Jensen will serve as moderator of this panel, guiding the discussion on what the Latin American public and private sectors and the multilateral organizations can do to foster future growth and inclusion in the Americas. Opening and Closing remarks by professor Ricardo Ernst, Georgetown University.

PANELISTS
Mauricio Claver-Carone: Elected President of the Inter-American Development Bank (IDB) on October 1, 2020. As President of the IDB, he also chairs the Board of Executive Directors of IDB Invest, the private-sector arm of the IDB Group, and the Donors Committee of IDB Lab, the Bank’s incubator for innovative development projects. He has a very extensive career in the public sector. His most recent positions include Deputy Assistant to the President of the United States and Senior Director for Western Hemisphere Affairs at the National Security Council. In this capacity, he was the U.S. President’s principal advisor on issues related to Canada, Latin America, and the Caribbean. Mr. Claver-Carone previously served as the United States Executive Director at the International Monetary Fund (IMF), where he represented the United States, as the largest shareholder on the IMF’s Executive Board.
Manuel J. Balbontin (P’19): Chairman of Georgetown University’s Latin American Board. Partner and founder of Compass Group, executive chairman of Compass Group Holdings, and senior investment strategist. Previous to founding the firm, Mr. Balbontín was a managing director and founder of New World Investments Group of Banco Santander in New York. Mr. Balbontín was also director of capital markets and co-director of sales and trading of Citicorp Emerging Markets Group in New York, London, and Tokyo. He has over 30 years of experience in asset management, investment banking, and private capital investments in Latin America and other emerging markets.
Samuel Lewis Navarro (B’79, P’18): former first vice president and foreign minister of Panama (2004-2009) and past chair of the Georgetown University Latin American Board, which advises the university’s leadership in its engagement with the region. He has served as president of several large companies and on the board of 11 industrial, real estate, farming, and investment companies.
Alberto Beeck ( P’15, P’17, P’18) : Managing partner of Cranley Investments Holdings, managing partner of VH Properties, and chairman of Lumni (a company that invests in human capital). Alberto serves on the boards of Industria Works, DB Andean Towers, WE Family Offices Holdings, and Endeavor Miami. He is a former member of the board of trustees of Georgetown University, founder and chairman of Georgetown’s Beeck Center for Social Impact and Innovation, and founder, current board member, and former chairman of Georgetown University’s Latin American Board.

and Moderated by
Muni Jensen (G’94): senior advisor with Albright Stonebridge Group, where she uses her experience and expertise as a political analyst and former Colombian diplomat to advise clients on issues related to Latin American politics, United States-Latin America trade, and public affairs. She hosts the world news podcast Altamar and is a graduate of Georgetown’s Latin American Studies M.A.