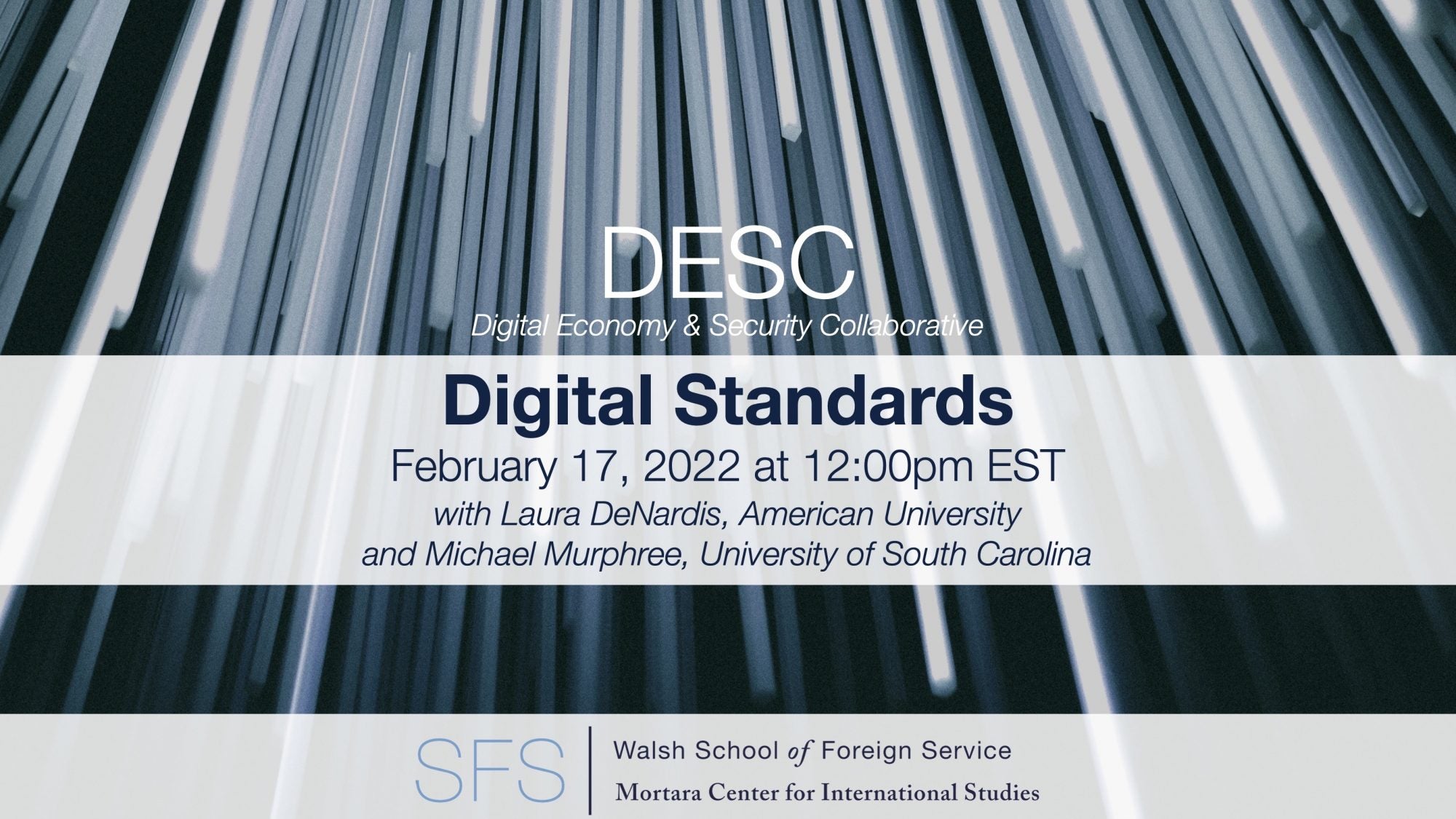 The Digital Economy & Security Collaborative (DESC) is launching a two-year speaker series this fall, bringing in leading thinkers from a range of disciplines to share their ideas and engage with the DESC community. The series covers social media, cybersecurity, artificial intelligence, technology standards, supply chains, and transnational repression.

Please join us on Thursday, February 17 at 12pm EST for the sixth event of the series, where Laura DeNardis of American University and Michael Murphree of the University of South Carolina will discuss digital standards.

Register here to receive the Zoom link for the event.

Dr. Laura E. DeNardis (L.E.D) is a scholar of Internet architecture and governance and a tenured Professor in the School of Communication at American University in Washington, D.C.  She served as Interim Dean of the American University School of Communication from 2019-21 and Associate Dean for Faculty Affairs from 2013-2019. She has held a number of leadership positions throughout her career including Executive Director of the Yale Information Society Project from 2008-2011 and Director of Research for the Global Commission on Internet Governance. Professor DeNardis was the recipient of American University’s highest faculty honor – Scholar-Teacher of the Year – in 2018. Her expertise and scholarship has been featured in Bloomberg, Science Magazine, The Economist, National Public Radio (NPR), New York Times, Newsweek, Time Magazine, Christian Science Monitor, Slate Magazine, Reuters, Forbes, the Washington Times, El Pais, La Repubblica, The Atlantic, and the Wall Street Journal.

Michael Murphree received his Ph.D. in International Affairs from the Georgia Institute of Technology. He speaks fluent Mandarin and has conducted field research in China since 2007. He currently teaches “Globalization and International Business” and “Comparative Innovation Systems” at the Moore School and taught “Political Economy of Innovation in China” and “Introduction to International Political Economy” as a Ph.D. candidate at Georgia Tech. Murphree has published peer-reviewed journal articles, as well as a book, chapters in edited volumes and numerous commissioned reports. His book, The Run of the Red Queen: Government, Innovation, Globalization, and Economic Growth in China, was the winner of the 2012 British International Studies Association Susan Strange Best Book Award and bronze medalist for the 2012 Axiom Business Book Award for International Business/Globalization. It was co-authored with scholar Dan Breznitz and published in 2011.