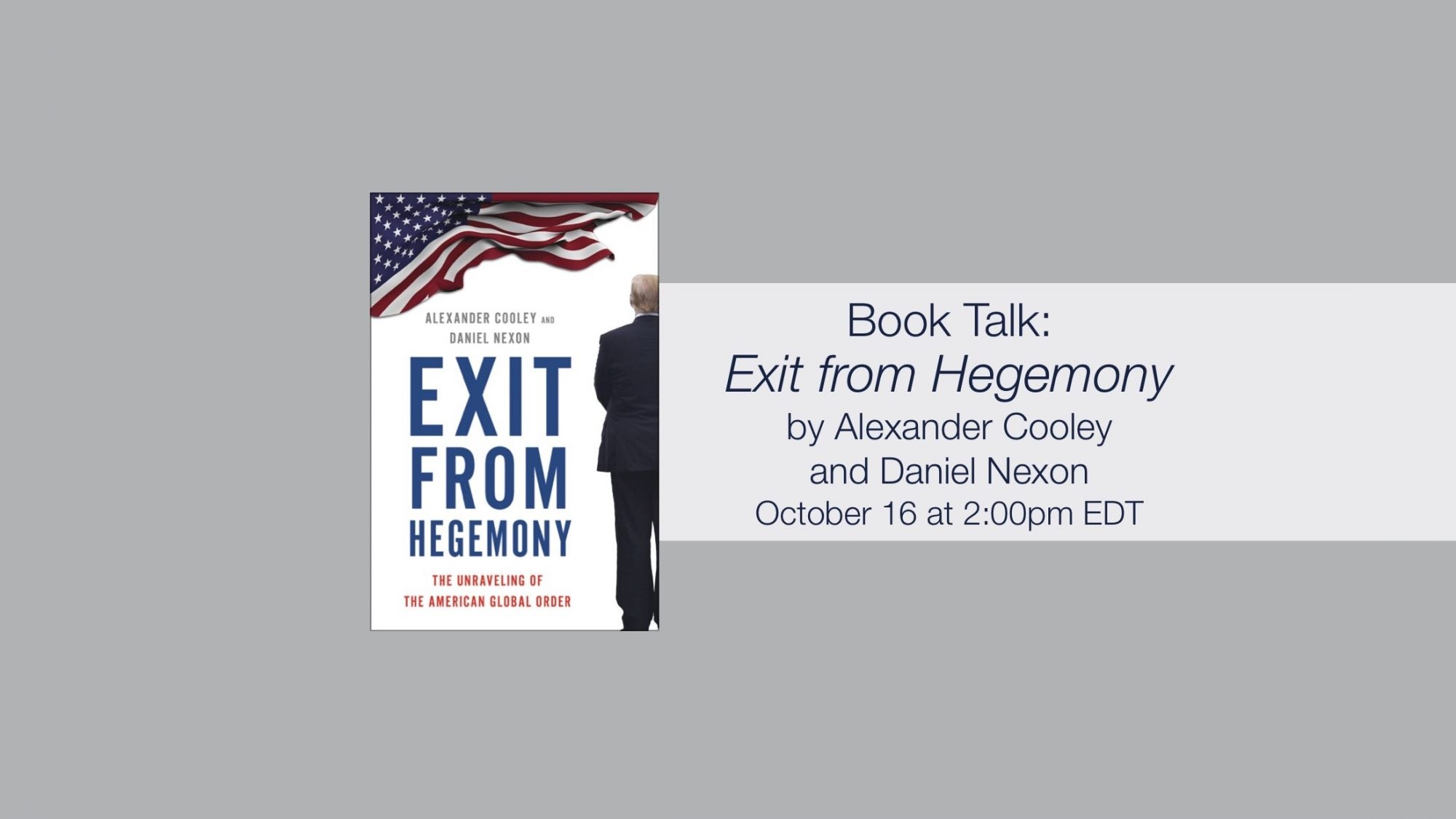 In Exit from Hegemony, Alexander Cooley and Daniel Nexon develop a new, integrated approach to understanding the rise and decline of hegemonic orders. Their approach identifies three distinct ways in which the liberal international order is undergoing fundamental transformation. First, Russia and China have targeted the order, positioning themselves as revisionist powers by establishing alternative regional institutions and pushing counter-norms. Second, weaker states are hollowing out the order by seeking patronage and security partnership from nations outside of the order, such as Saudi Arabia and China. Even though they do not always seek to disrupt American hegemony, these new patron-client relationships lack the same liberal political and economic conditions as those involving the United States and its democratic allies. Third, a new series of transnational networks emphasizing illiberalism, nationalism, and right-wing values increasing challenges the anti-authoritarian, progressive transnational networks of the 1990s. These three pathways erode the primacy of the liberal international order from above, laterally, and from below. The Trump administration, with its “America First” doctrine, accelerates all three processes, critically lessening America’s position as a world power.

Please join us on October 16, 2020 at 2:00pm EDT for a discussion with the authors about their research. Register here to receive the link to the event.

Dan Nexon is a Professor at the Edmund A. Walsh School of Foreign Service and the Department of Government at Georgetown University. Professor Nexon’s work covers issues in international-relations theory, American foreign policy, power politics, the politics of religious contention, and the relationship between popular culture and world politics. He has held fellowships at Stanford University’s Center for International Security and Cooperation and at the Ohio State University’s Mershon Center for International Studies. During 2009-2010 he worked in the U.S. Department of Defense as a Council on Foreign Relations International Affairs Fellow. He was the lead editor of International Studies Quarterly from 2014-2018. He founded, and used to blog, at The Duck of Minerva. He currently blogs at Lawyers, Guns and Money.

Alexander Cooley is the Claire Tow Professor of Political Science at Barnard College and Director of Columbia University’s Harriman Institute (2016-present) for the study of Russia, Eurasia and Eastern Europe. Professor Cooley’s research examines how external actors—including emerging powers, international organizations, multinational companies, NGOs, and Western enablers of grand corruption—have influenced the development, governance and sovereignty of the former Soviet states, with a focus on Central Asia and the Caucasus. Cooley is the author and/or editor of seven academic books including, Great Games, Local Rules: The New Great Power Contest in Central Asia (Oxford University Press, 2012), Dictators without Borders: Power and Money in Central Asia (Yale University Press 2017), co-authored with John Heathershaw, and most recently, Exit from Hegemony: the Unravelling of the American Global Order (Oxford University Press, 2020), co-authored with Daniel Nexon. In addition to his academic research, Professor Cooley serves on several international advisory boards engaged with the Eurasian region and has testified for the United States Congress and Helsinki Commission.  Cooley’s opinion pieces have appeared in New York Times, Foreign Policy and Foreign Affairs and his research has been supported by fellowships and grants from the Open Society Foundations, Carnegie Corporation, and the German Marshall Fund of the United States, among others. Cooley earned both his MA and Ph.D. from Columbia University.