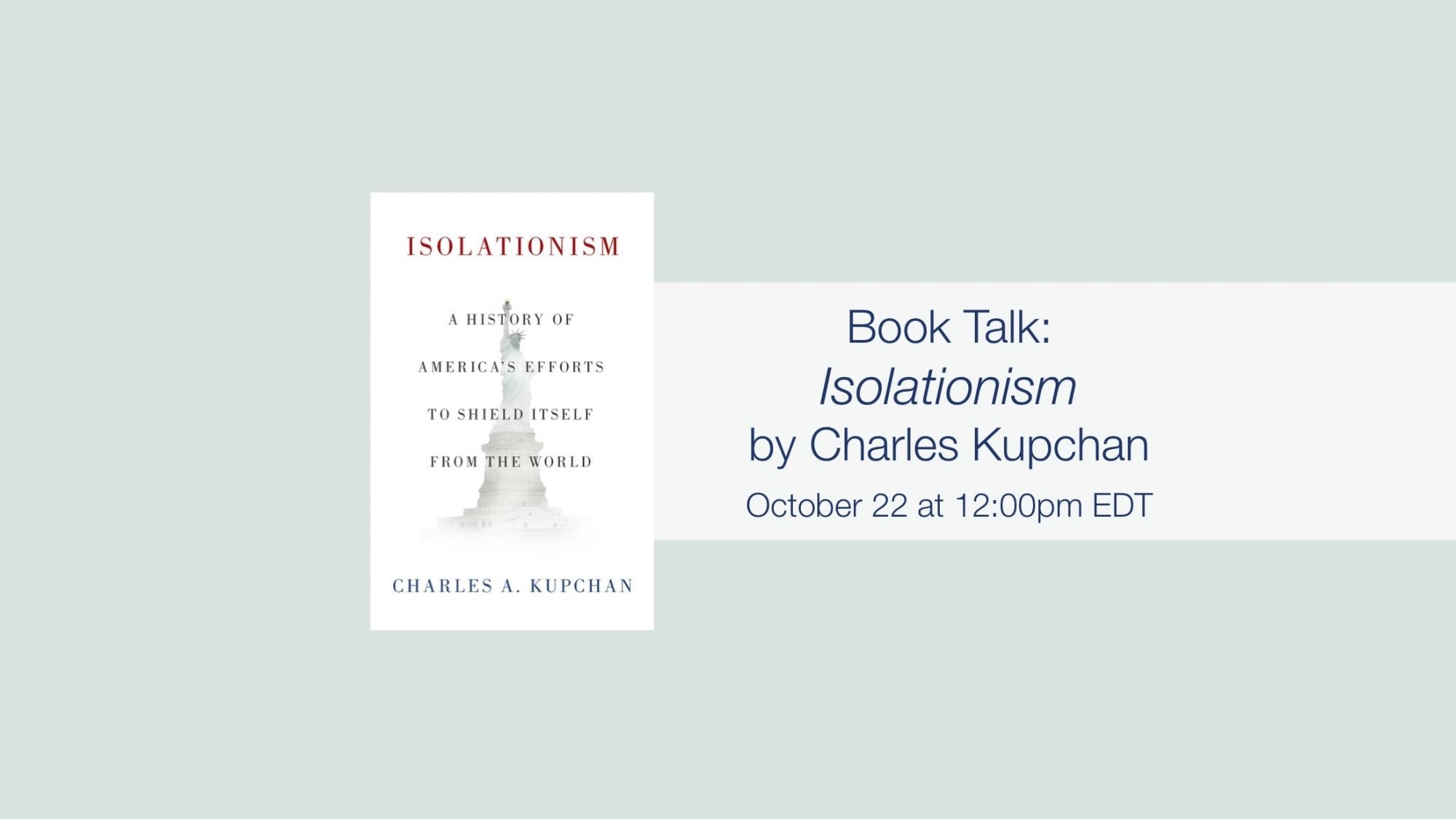 Book Talk: Charles Kupchan, “Isolationism: A History of America’s Efforts to Shield Itself from the World”

Charles Kupchan’s new book is a history of isolationism in the United States, from the founding era through the Trump administration. He looks through the lens of American history at the debates currently taking place about America’s role in the world, the meaning and implications of Trump’s America First foreign policy, and where the U.S. should head in the years ahead.  It’s the first book to tell the story of isolationism across the arc of American history in the service of shedding light on the past, present, and future shape of U.S. foreign policy.

Please join us on October 22, 2020 at 12:00pm EDT for a discussion with Professor Kupchan about his research. This event will be moderated by Professor Kathleen McNamara with comments from Professor Jamie Martin. Register here to receive the link to the event.

Dr. Kupchan is Professor of International Affairs in the School of Foreign Service and Government Department at Georgetown University, and Senior Fellow at the Council on Foreign Relations. From 2014 to 2017 Kupchan served as Special Assistant to the President and Senior Director for European Affairs on the National Security Council in the Obama White House. He was also Director for European Affairs on the NSC during the first Clinton administration. Before joining the Clinton NSC, he worked in the U.S. Department of State on the Policy Planning Staff. Previously, he was Assistant Professor of Politics at Princeton University. He is the author of No One’s World: The West, the Rising Rest, and the Coming Global Turn (2012), How Enemies Become Friends: The Sources of Stable Peace (2010), The End of the America Era: U.S. Foreign Policy and the Geopolitics of the Twenty-first Century (2002), Power in Transition: The Peaceful Change of International Order (2001), Civic Engagement in the Atlantic Community (1999), Atlantic Security: Contending Visions (1998), Nationalism and Nationalities in the New Europe (1995), The Vulnerability of Empire (1994), The Persian Gulf and the West (1987), and numerous articles on international and strategic affairs. Kupchan received a B.A. from Harvard University and M.Phil. and D.Phil. degrees from Oxford University. He has served as a visiting scholar at Harvard University’s Center for International Affairs, Columbia University’s Institute for War and Peace Studies, the International Institute for Strategic Studies in London, the Centre d’Etude et de Recherches Internationales in Paris, and the Institute for International Policy Studies in Tokyo. During 2006-2007, he was the Henry A. Kissinger Scholar at the Library of Congress and was a Fellow at the Woodrow Wilson International Center for Scholars. During 2013-2014, he was a Senior Fellow at the Transatlantic Academy.