Why do autocrats conduct political trials when outcomes are presumed known from the start? In her recent book, Undue Process, Shen-Bayh examines how autocrats weaponize the judiciary to stay in control. Contrary to conventional wisdom that courts constrain arbitrary power, Shen-Bayh argues that judicial processes can instead be used to legitimize dictatorship and dissuade dissent when power is contested. Focusing on sub-Saharan Africa since independence, Shen-Bayh draws on fine-grained archival data on regime threats and state repression to explain why political trials are often political purges in disguise, providing legal cover for the persecution of regime rivals. This analysis reveals how courts can be used to repress political challengers, institutionalize punishment, and undermine the rule of law. 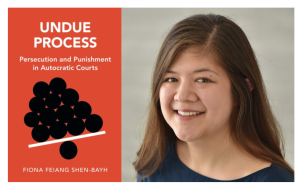