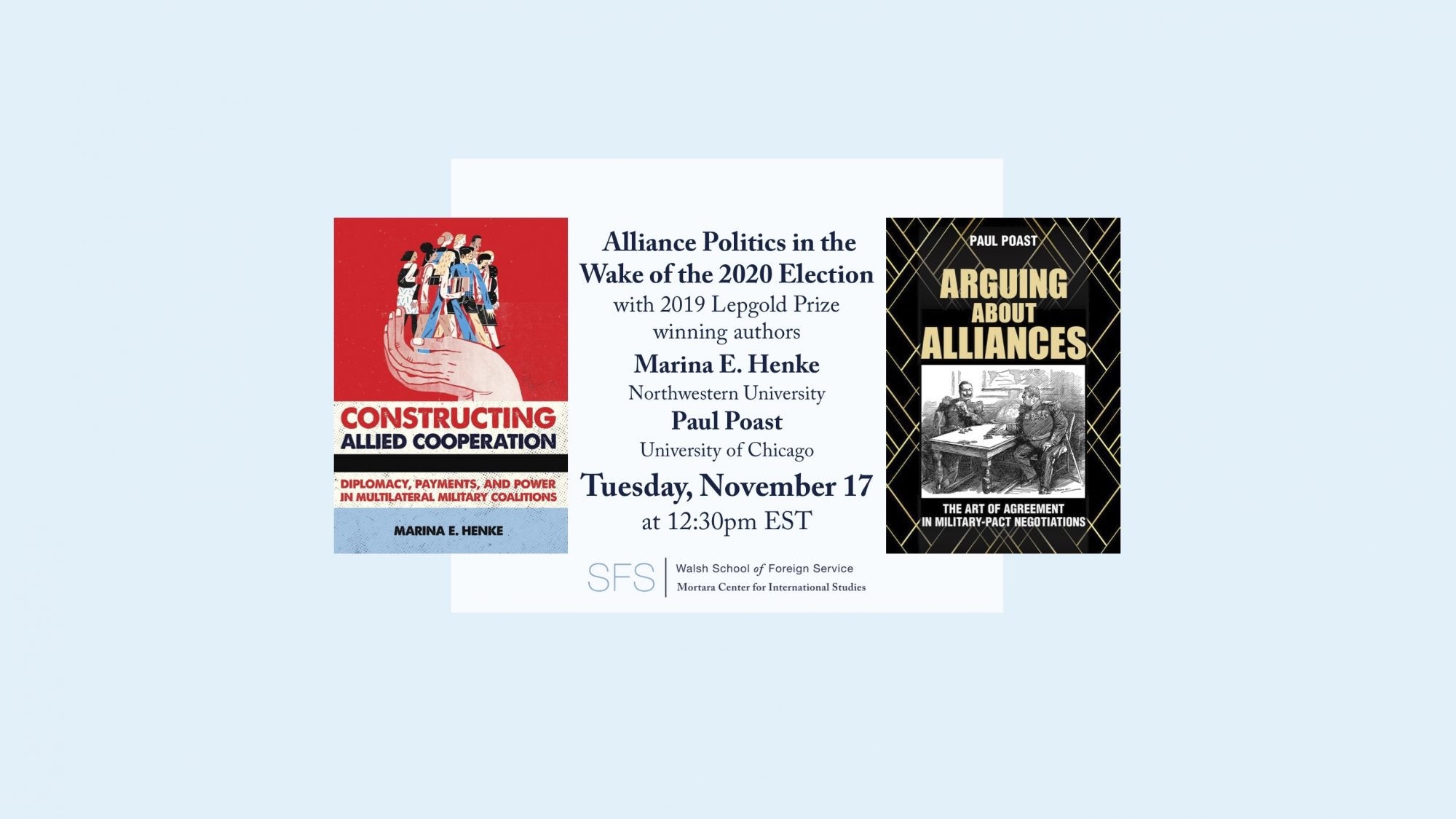 Alliance Politics in the Wake of the 2020 Election

Please join the Mortara Center for the Annual Lepgold Book Prize Award and Lecture. Winning authors Marina E. Henke and Paul Poast will discuss their books Constructing Allied Cooperation: Diplomacy, Payments, and Power in Multilateral Military Coalitions and Arguing about Alliances: The Art of Agreement in Military-Pact Negotiations within the context of the results of the 2020 election. The event will be moderated by Professor Andrew Bennett in conversation with Professor Abe Newman. Register here to receive the link to the event.

How do states overcome problems of collective action in the face of human atrocities, terrorism and the threat of weapons of mass destruction? How does international burden-sharing in this context look like: between the rich and the poor; the big and the small? These are the questions Marina E. Henke addresses in her new book Constructing Allied Cooperation. Through qualitative and quantitative analysis of 80 multilateral military coalitions, Henke demonstrates that coalitions do not emerge naturally. Rather, pivotal states deliberately build them. They develop operational plans and bargain suitable third parties into the coalition, purposefully using their bilateral and multilateral diplomatic connections—what Henke terms diplomatic embeddedness—as a resource. As Constructing Allied Cooperation shows, these ties constitute an invaluable state capability to engage others in collective action: they are tools to construct cooperation.

Why do some attempts to conclude alliance treaties end in failure? From the inability of European powers to form an alliance that would stop Hitler in the 1930s, to the present inability of Ukraine to join NATO, states frequently attempt but fail to form alliance treaties. In Arguing about Alliances, Paul Poast sheds new light on the purpose of alliance treaties by recognizing that such treaties come from negotiations, and that negotiations can end in failure.
In a book that bridges Stephen Walt’s Origins of Alliance and Glenn Snyder’s Alliance Politics, two classic works on alliances, Poast identifies two conditions that result in non-agreement: major incompatibilities in the internal war plans of the participants, and attractive alternatives to a negotiated agreement for various parties to the negotiations. As a result, Arguing about Alliances focuses on a group of states largely ignored by scholars: states that have attempted to form alliance treaties but failed. Poast suggests that to explain the outcomes of negotiations, specifically how they can end without agreement, we must pay particular attention to the wartime planning and coordinating functions of alliance treaties. Through his exploration of the outcomes of negotiations from European alliance negotiations between 1815 and 1945, Poast offers a typology of alliance treaty negotiations and establishes what conditions are most likely to stymie the attempt to formalize recognition of common national interests.

The Georgetown University Lepgold Book Prize honors Joseph S. Lepgold, a Georgetown University Government and School of Foreign Service professor who died in a tragic hotel fire in Paris in December 2001. The prize honors exceptional contributions to the study of international relations, with particular emphasis on the resolution of critical policy challenges, published each calendar year.